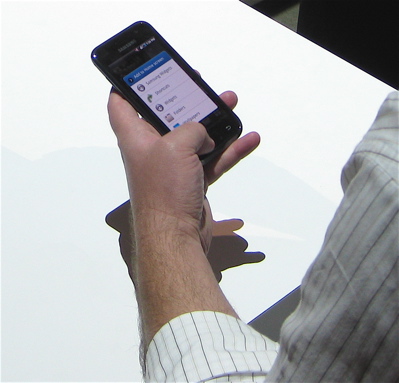 HTC and Sprint's EVO may have stolen the show at CTIA today, but Samsung showed off its own Android 2.1 superphone called the Galaxy S. It's just as impressive as the EVO, just without the 4G muscle.

And while it may look like the fraternal twin of Apple's iPhone, especially with the TouchWIZ UI, Samsung's Galaxy S is no iClone.

While all of that is impressive on its own, Samsung has packed it all into a chassis with a 9.9mm profile. It makes the device slightly thinner than the iPhone 3GS (12.5mm in thickness) and thicker than the iPod Touch (8.5mm).

Some of the most outstanding features so far, however, appear to be the exclusive applications that come with it. Galaxy S has a built in app for tethering; a Samsung AllShare app, which gives the phone instant DLNA compatibility for multimedia sharing in the home; and an e-book reader app from Skiff. That's the company that rose to popularity earlier this year when Hearst Publishing announced the Skiff e-reader. The screenshot Samsung showed today looked perfectly identical to the iBooks app that's due to launch with the iPad on April 3.

If it wasn't for the EVO announcement which came just two hours afterward, the Galaxy S would have undoubtedly been today's most intriguing new device unveiling at CTIA. Battery life for the EVO, however, remains a pivotal issue, and it may turn out that the more typical 3G radio array in the Galaxy S was the smarter choice for Samsung.

Samsung says the Galaxy S will be launched worldwide "soon."