I have three questions for my Betanews writing colleague Carmi Levy: Do you own a Mac or iPhone? Do you invest in Apple? Did you preorder iPad or plan to buy one next week? For fair disclosure, I am writing this post on a 13-inch MacBook Pro (running Snow Leopard). I don't own an iPhone (anymore) and I have never invested in Apple (I own no stock whatsoever; I'll die poorer by my no-conflict-of-interest principles). I ask these questions because he writes: "To set the record straight, from where I sit, the media are not biased toward Apple."

Carmi Levy made that -- and many other shocking statements -- in late Thursday post: "Enough with the Apple bashing!" Eh, what Apple bashing? In my Sunday post, "Be smart, don't buy into the iPad hype," I gave clear examples how bloggers, reporters and Wall Street analysts are biased in favor of Apple. My colleague offers no evidence, just innuendo, to support claim that  a "backlash against Apple increases to compensate" for Apple succeeding "where others have failed."

My colleague asserts: "Detractors of all things Apple point to initial iPad sales figures as evidence that something is amiss. They claim supporters are manipulating the stats to depict Apple favorably. First off, no one cares about initial sales figures. They may fill editorial space on a slow news day, but they don't say much about a given device's long-term chances."

If no one cared about early sales figures, why were there so many blog posts or news stories about them? This Google search reveals the enormous number of blogs or news sites following Apple 2.0 post: "Day 1 estimate: 120,000 iPads sold." This other Google search shows, again, a large number of additional reports following March 15 claim: "150,000 iPads pre-ordered already." Apparently, lots of people do care, and that's driven in part by Wall Street's Apple lovefest. Ongoing rumors about iPad have helped lift Apple's share price into the stratosphere. Investors have every reason to talk up Apple (OK, except perhaps for nasty short sellers).

As I write, Apple shares reached another 52-week high today -- $231.95. A year ago, Apple shares traded at $109.87. Since early January, Apple shares have rise and fallen -- but generally gone up -- in tandem with rumors about iPad. The stock actually dipped after the late January iPad announcement (to $192.06) but picked up thereafter (yes, with a few more dips) in tandem with rumors about iPad preorders, preoder availability, rumors about the number of iPad preorders and ongoing rumors about media deals. Rumors, rumors, rumors. Are the majority of these rumor posts or stories negative? Are bloggers, reporters or Wall Street analysts bashing Apple? The majority absolutely are not. The Apple bashing will come later, should iPad fail to meet the expectations set by the hype.

If anything the news media is obsessed with iPad. March 24 Wall Street Journal story "Magazines Use the iPad as Their New Barker" is a frightening tale of Apple media obsession: "Time magazine has signed up Unilever, Toyota Motor, Fidelity Investments and at least three others for marketing agreements priced at about $200,000 apiece for a single ad spot in each of the first eight issues of the magazine's iPad edition, according to people familiar with the matter." 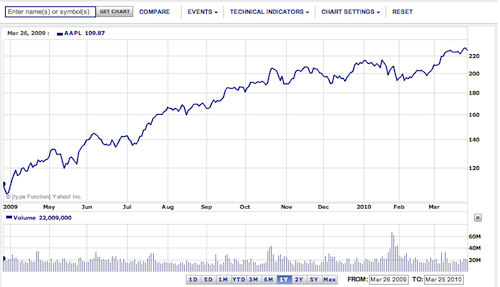 That's a surprising amount to spend per ad on an untried new media platform with arguably low initial distribution. By the way, Time's full-page US national rate for print is $287,440 for claimed audience of 19.5 million off a subscription base of 3,372,240. Assuming the rumored first-weekend iPad preorders of 150,000 units are accurate and also subsequent rumors of 10,000 units a day, sales would be about 330,000 units going into launch day -- or about 10 percent of Time's subscriber base. Somebodies at Time and among its advertising customers are putting some big faith in small numbers.

"Magazine publishers see the device as crucial to their future as they scour for new ways to make money, with print advertising still under threat," write WSJ reporters Shira Ovide and Suzanne Vranica. There's desperation and arguably insane business planning.

Wall Street Journal also is beating on advertisers' doors, trying to convince them to buy into its iPad app. Ovide and Viranica write:

Six advertisers, including Coca-Cola and FedEx, have agreed to advertise with the Journal, and a four-month ad package costs $400,000, according to these people. Coke and FedEx declined to comment on terms. The Journal plans to charge subscribers $17.99 a month for iPad subscriptions, according to a person familiar with the matter.

The Journal plans on charging advertisers less than Time but make readers pay more than they do now: The WSJ Online typically costs $2.87 a week (or about $12.44 a month), but the newspaper is running a $1.99 a week special, or $8.62 a month. So the iPad version will cost almost $10 more a month than the Journal Online. Combined print and online is $2.69 a week -- that works out to about $140 a year or $11.67 a month, again less than WSJ for iPad. That is unless WSJ plans to offer online, print or both along with the iPad subscription.

What kind of backlash is there in that? I read these media companies' actions as huge support of Apple's iPad effort -- and with a touch of irrationality, or desperation. Carmi Levy supports his bashing claims by asserting: "Apple-friendly consumers are dismissed as 'fanboys' having drunk the Kool-Aid." Actually this quality has long been assigned to the so-called "Mac faithful," not mainstream consumers. But that's not the point. Clearly some media companies and Wall Street analysts have drunk the Kool-Aid, given their seemingly unquestioning faith in the unproven iPad.

My colleague also states that Apple "CEO Steve Jobs is accused of using his 'Reality Distortion Field' to get customers to buy Apple products without asking so much as a single question.' The statement is meant as defense of Apple, but I assert the Reality Distortion Field is real. Jobs is a marketing master. Before his recent illness I would categorize a Jobs keynote or new product introduction two ways: When Jobs is having a bad presentation day, people walk out of the venue feeling like if they buy the new "one more thing" product, there lives will be better for it. When Jobs is on fire, making a great presentation, people feel their lives will be worse if they don't buy the new thing. 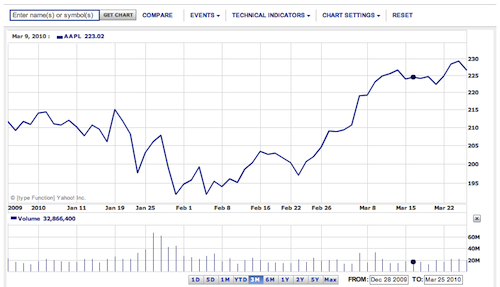 Jobs knows how to sell aspiration. Extremely well. That's what good marketing is all about: Convincing you that greater happiness will come with Product X, Y or Z. Effective marketing often plays off the emotions, not the intellect, and iPad is such a great example. During the late-January product launch, Jobs described iPad as a more intimate way to experience the Web. In Apple's iPad promotional video, Scott Forstall, senior vice president of iPhone software, makes a nearly identical assertion:  "It just feels right to hold the Internet in your hands as you surf it." Oh yeah? So people surfing the Web on their iPod touch, iPhone or other smartphone aren't holding the Web in their hands as they surf it?

Apple's iPad Website also describes iPad as a "magical and revolutionary product at an unbelievable price." Those are loaded, aspirational modifiers. In the iPad promo video, Apple numero uno designer Jony Ive says about the device: "I don't have to change myself to fit the product. It fits me." Aspirational marketing is about you and what the product will do for you.

People who believe this kind of marketing do "drink the Kool-Aid." They're rewarded if the marketed product meets or exceeds expectations. There's reality distortion if the product is less than what the marketing makes it seem; same can be said when bloggers, journalists, media companies and their advertisers or Wall Street analysts are so positive about a product that's unproven and not even released.

There's no Apple backlash. If anything, there's a new Messiah complex, whether you choose Steve Jobs, iPad or both as savior. Jesus Christ isn't coming on the clouds from Heaven on April 2nd, not with iPad as second coming. Although, should he or even alien visitors make an appearance next week, perhaps finally something will overshadow out-of-control Apple and iPad hype. Perhaps.