What does Steve Jobs' 'inner circle' say about Apple?

Over at Digital Inspiration, Amit Agarwal asserts there is an inner circle of 10 journalists that get advance review access to hot new Apple products -- ah, like iPad. The first iPad reviews appeared overnight, and many of them are quite favorable. The reviews come just days before iPad goes on sale -- Saturday 9 a.m. local time here in the United States.

Agarwal does an excellent job detailing the three-phase process, who is in the inner circle and what are the benefits to Apple. I won't repeat what he so astutely explains. Read his post. Too much Web content is the regurgitation of what someone else reported, rather than bloggers or journalists doing original reporting. However, Agarwal graciously gave me permission to use the inner circle graphic he created. If you don't know who these people are, read Agarwal's post!

I want to extend Agarwal's fine analysis and generate some debate about its meaning here at Betanews. On Twitter, Steve Dieke asked me: "Does 'inner circle' = ability to control?" To which I responded: The 'Inner Circle' posts reviews that are reblogged everywhere. Apple gets big bang promotion, but somewhat controlled." Hells, bells. One 140-character-limited tweet isn't space for proper answer. Hence, the post you are now reading.

Apple's approach to early reviews of blazingly new products is old school, and then some. At first glance, the approach seemingly defies all the new social media conventions. But from control and personality perspectives, Apple's approach is understandable.

Apple CEO Steve Jobs is a cult of personality. Is it surprising then that Apple has an inner circle of reviewers that happen also to be personalities? It's not so much about the publications but the reviewers. The 10 people are a veritable Who's Who list of tech reviewers -- all personalities with followings. I don't mean to diss any of these reviewers, particularly as I respect most of them. I'm just spinning this from an Apple perspective -- creating a mini-cult of personalities reflecting the larger one. Apple seeks to maximize the impact of the reviews, which it can only hope will be positive, by choosing respected reviewers. Are they impartial? Surely, Apple hopes not. I hope they are -- and find many to be reasonably so. 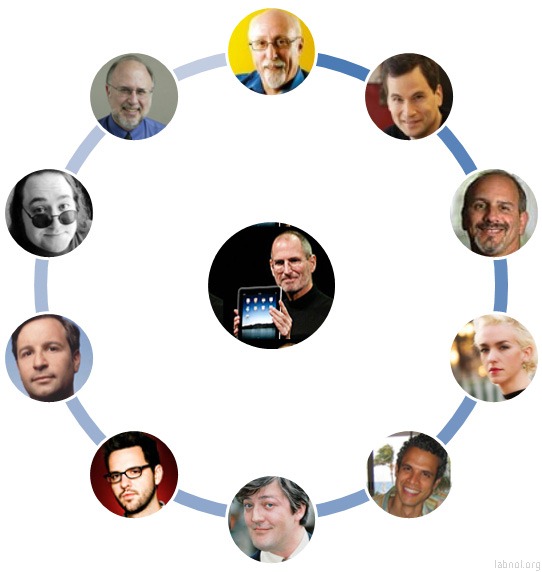 Then there is the control issue. Early reviews shape the reaction to new products. Microsoft learned this from Windows Vista. Following the disastrous Windows Vista laptop loaner program, Microsoft couldn't get a break from reviewers. Microsoft's wide distribution of loaners backfired in a big way, precipitating negative Vista reviews and persistent negative perceptions the operating system could never shake.

Now compare to Apple, which sends out early review units of hot, new products to a select few. Apple can better control any damaging reviews and maximize any positive ones. In this era of social media and sharing, the approach seems non-sensical. Isn't more better? Sure, but the more Apple gets comes from other blogs and news sites sharing the few reviews -- even big gadget blogs post about early, hot, new Apple product reviews. So Apple can somewhat filter information, while still getting the social media big bang.

How big is the bang? By mid-afternoon today, BBC, Barons, CNN, Detroit Free Press, Forbes, PC Magazine and Wall Street Journal were among the major mainstream news organizations with iPad review roundups. Then there are the blogs, the blogs, the blogs. The roundups are everywhere. Everyone wants a chunk of the pageviews iPad review roundups will generate (Oh, yeah, maybe somebody cares about regular readers, too).

All this information dissemination comes with Apple in the best control it can exert short of giving out no early review units whatsoever. Or so I assert.

Many companies place tremendous emphasize on social media and networking as part of their marketing efforts. However, Apple isn't buying into social media, because the company can't control the image, the perception. Apple's YouTube site is such good example. After years of abandon, Apple recently started populating its YouTube site with iPad videos. Apple wants people watching but not responding -- at least not there. Comments are disabled.

By the way, it's my experience Apple typically only activates the inner circler for big product releases. Also, the circle of people with iPads is likely larger than 10 when factoring in analysts and other people -- and I've heard other reviewers have been getting devices today. The inner circle, as I see it, refers to the select early reviewers with permission to write about the product. Fair disclosure, before some commenter makes an assertion: I wasn't expecting an iPad review unit from Apple, so this post doesn't reflect any hard feelings on my part. I'm not jealous of the 10 journalists, nor should be anyone else.

I've done my analysis. Now it's your turn. What do you think about how Apple handles important product reviews or generally disseminates information? Is the company controlling or not? If controlling, too much or not? Please respond in comments, also adding your own questions to the discussion.

20 Responses to What does Steve Jobs' 'inner circle' say about Apple?