Today, just as Adobe released a preview of Flash Player for Mac OS X that features H.264 video decoding, Apple CEO Steve Jobs released a letter called "Thoughts on Flash," which explains the many reasons why there's no Flash support on any of Apple's mobile devices, and why H.264 is a better format.

The letter is emblematic of Apple's increasingly verbal approach to the frantically interested but highly misunderstanding public: "Adobe has characterized our decision as being primarily business driven -- they say we want to protect our App Store -- but in reality it is based on technology issues. Adobe claims that we are a closed system, and that Flash is open, but in fact the opposite is true. Let me explain."

Jobs then explains in very plain detail six different reasons why Flash is a technological weakness in Apple's mobile realm. Those reasons may be broken down into very simple bullet points:

Apple has made these points in the past, just not as a single list straight from the CEO's own pen. 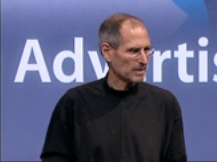 Jobs concludes his letter by saying, "Flash was created during the PC era -- for PCs and mice. Flash is a successful business for Adobe, and we can understand why they want to push it beyond PCs. But the mobile era is about low power devices, touch interfaces and open Web standards -- all areas where Flash falls short...New open standards created in the mobile era, such as HTML 5, will win on mobile devices (and PCs too). Perhaps Adobe should focus more on creating great HTML 5 tools for the future, and less on criticizing Apple for leaving the past behind."

Don't be misled, this letter was written with the consumer in mind (specifically, the ones who read the New York Times interview with Google's Andy Rubin this week.)

In his interview with the paper, Rubin made a powerful statement about Android and Flash: "[Being open] means not being militant about the things consumers are actually enjoying."

Jobs' letter, by contrast, is telling the public that "what they want" may not be the best for the iPhone.