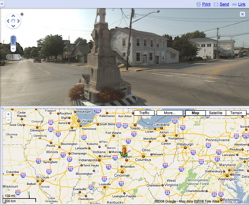 Google today said it will stop collecting Wi-Fi network data from its Street View cars, after an investigation from the German Data Protection Authority (DPA) found the search company was also collecting personal data about user behavior on these public hotspots.

Google's Street View cars weren't only taking 360-degree images of our streets for use on Google Maps, but they were also pulling publicly broadcast SSID and MAC information from Wi-Fi hotspots.

"It's now clear that we have been mistakenly collecting samples of payload data from open (i.e. non-password-protected) WiFi networks, even though we never used that data in any Google products," Alan Eustace, Senior Vice President of Engineering and Research said today.

"So how did this happen? Quite simply, it was a mistake," Eustace said. "In 2006 an engineer working on an experimental WiFi project wrote a piece of code that sampled all categories of publicly broadcast WiFi data. A year later, when our mobile team started a project to collect basic WiFi network data like SSID information and MAC addresses using Google's Street View cars, they included that code in their software--although the project leaders did not want, and had no intention of using, payload data."

Google has since halted all of its Street View vehicles, stopped collecting Wi-Fi data altogether, and "segregated the data" it has collected. Unfortunately, it's still all in Google's servers, though. According to Eustace, "We want to delete this data as soon as possible, and are currently reaching out to regulators in the relevant countries about how to quickly dispose of it."