Research in Motion surges to No. 4 in global mobile phone sales, Apple to No. 7

Today, Gartner released first quarter 2010 worldwide mobile phone sales data, and it's the set that matters. Unlike IDC or manufacturers like Apple, Gartner tracks actual sales to users rather than shipments to carriers or retailers. Shipment data is less accurate, because of unsold inventory in the channel. Based on sales, Apple ranked No. 7 in worldwide mobile handset sales, just behind sagging Motorola. That's for all phones, not just smartphones.

For smartphones, Android and iPhone OS made huge gains, with Gartner describing them as the "winners" for the quarter. Android rose from 575,300 unit sales to 5.2 million year over year, pushing Windows Mobile down into the fifth position. Because there already is a fair amount of misreporting, such as Apple pushing ahead of Motorola, I will continue the main portion of this post with some quick -- and in some instances -- corrective facts:

2. Apple did not outsell Motorola. But I've been reading this heresy for weeks based on unit shipments. Based on actual sales, Motorola is No. 6 worldwide.

3. Motorola is rapidly declining, however. Year over year, unit shipments plunged from 16.6 million to 9.6 million.

4. Research in Motion moved into the top five, at No. 4, for worldwide phone sales. That's while competing against cheaper handsets from competitors like Nokia. While growing less than Apple, 45.9 percent year over year compared to 112.2 percent, RIM sales are much stronger.

5. White box competition is sucking sales from major manufacturers. Combined top-five share dropped from 73.3 percent to 70.7 percent year over year. White box manufacturers are mostly shipping from Asia, and some are mimicking handsets like iPhone, while offering more features, such as dual-SIM capabilities. 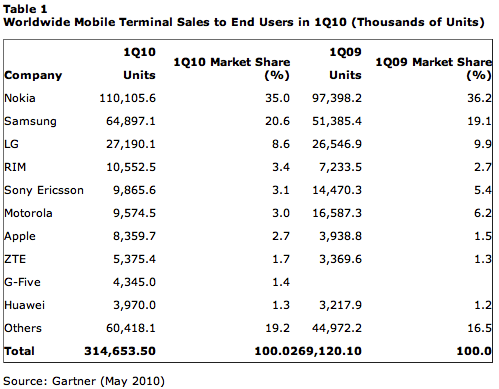 7. Distribution mattered to Apple. "Growth came partly from new communication service providers in established markets, such as the UK, and stronger sales in new markets such as China and South Korea," Carolina Milanesi, Gartner research vice president, said in a statement.

8. Only Android and iPhone OS made year-over-year market share gains among the top-five smartphone operating systems.

9. The quarter's best performers controlled hardware, software and services -- essentially an end-to-end stack, except for carriers. Apple, Nokia and RIM are end-to-end providers. 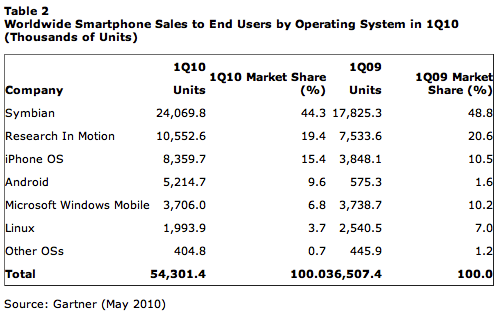 Now for some additional data points and quotes from Gartner analysts. Mobile handset sales rose 17 percent year of year to 314.7 million. Smartphone sales rose 48.7 percent to 54.3 million. Smartphones accounted for 17.3 percent of all mobile phones sales in first quarter, up from 13.6 percent a year earlier.

What this means: India is one of Nokia's strongest markets worldwide. Increasing white box popularity could drive down Nokia's share in India. For all major manufacturers, there will be increasing pressure to stay ahead of white box phone makers and, related, those imitating big-five designs.

"To compete in such a crowded [smartphone] market, manufacturers need to tightly integrate hardware, user interface, and cloud and social networking services if their solutions are to appeal to users," Roberta Cozza, Gartner principal research analyst said in a statement. "Just adding a qwerty keyboard will not make a device fit the communication's habits of today's various consumer segments."

What this means: Apple, Nokia and RIM have potentially stronger positions, the latter two only if they pull together weak services strategies. Google needs to standardize all Android handsets on one OS version and set of supporting services; even then, Google doesn't control enough of the stack.

7 Responses to Research in Motion surges to No. 4 in global mobile phone sales, Apple to No. 7