With patent chaos and financial crisis, can the EU pursue its 'Digital Agenda?'

Since Commissioner Neelie Kroes assumed the role of standard bearer for the European Union's Digital Agenda from her equally outspoken predecessor, Viviane Reding, she has become as personally associated with the Agenda as the US' Broadband Plan with its architect, FCC Chairman Julius Genachowski. In keeping with her reputation earned as the Competition Commissioner who many believe was responsible for finally humbling Microsoft, yesterday Comm. Kroes outlined some extremely ambitious goals not only for the Internet as a communications medium, but also as a marketplace -- several of which would leap-frog over US benchmarks, if they can be achieved.

Today, that is a huge "if." Ten days ago, as the continent faced a financial crisis as least as significant, if not more so, than what the US faced down in 2008, the EU's leaders opted to invest the equivalent of nearly a trillion dollars in the bonds of member countries' governments in the deepest crisis, including Greece, Portugal, and Spain.

If half the EU's gross domestic product is indeed driven by information and communications technology, as Kroes stated in a speech yesterday, then at least half of that investment is intended to be reinvested in banks that provide capital for information-driven businesses. Yes, it's a bailout -- and a huge one at that -- but without it, every agenda for Europe including the digital one stands in jeopardy.

Kroes reiterated her government's desire for the single market, which sounded like a shining dream for a brighter future back before the euro crisis set in. As MarketWatch reported today, the spread for long-term government bonds for the three countries in greatest crisis, versus short-term, is the widest in the history of the euro. Bond holders are asking huge premiums to hold long-term debt for countries they trust less.

And it's these countries, among others, where Kroes and her colleagues would demand telcos do more to meet the Digital Agenda's goal of full broadband Internet coverage of 100 Mbps or greater by 2020. This while Greek labor union workers take to the streets in protests -- some of them violent -- over that country's recent round of austerity measures, which cuts their working wages while simultaneously raising taxes.

It's amid that backdrop that Kroes unveiled her goals for a single market by 2020, the very first of which promises to make it easier for MP3 player owners to download songs from competitive online markets across Europe. 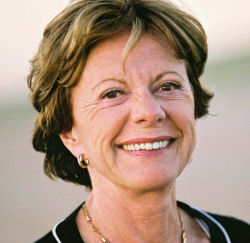 "Within a Digital Single Market, citizens should be able to enjoy commercial services and cultural entertainment across borders. But EU online markets are still separated by barriers which hamper access to pan-European telecoms services, digital services and content," Comm. Kroes told a press conference in Brussels yesterday. "Today there are four times as many music downloads in the US as in the EU because of the lack of legal offers and fragmented markets. The Commission therefore intends to open up access to legal online content by simplifying copyright clearance, management and cross-border licensing. Other actions include making electronic payments and invoicing easier and simplifying online dispute resolution."

For the Single Market plan to work, member nations will need to coalesce on the issue of intellectual property, including the biggest single question of all: Who gets to decide what IP belongs to whom? Today, there isn't really a pan-European patent and copyright system, but instead a kind of an agreement among nations to respect each other's patent laws and decisions -- an agreement that's much simpler in principle than in practice. The reason there isn't a borderless European digital music system in place today is not, as Kroes and her predecessor Reding have suggested before, that Apple won't let it happen. It's because each member nation still has a stake in royalties collected from the sale of MP3s online -- royalties that are almost impossible for any one site to calculate under the current system.

Yesterday, the EC did issue a communiqué on the current state of the Digital Agenda and the Single Market. In it, commissioners recommended that the EC issue a report by the end of 2012 on how it can better address the issue of intellectual property violations.

But the Commission's communiqué approached the issue of patent and copyright reform in pretty much the way its US congressional counterparts have done the last decade: by avoiding any mention of it. That brought criticism today from a source where you'd normally expect to find support: the continent-wide policy advocacy group Euractiv Network. In an open letter to Comm. Kroes today, Euractiv suggested that the omission might be intentional, as a concession to stakeholders in the present system that continues to benefit some countries and their recording industries just nicely, thank you.

The Commission suggests improved governance and transparency of collective rights management, while in fact the EU lacks the mechanism used by Google and other content providers, which cut deals with copyright holders so that people can today download content legally from YouTube and other sites.
The copyright holders in most if not all EU member states have built a system which corrupts government officials, spreads false information about so-called piracy, and encourages the inclusion of these countries in the US Trade Representative's Special 301 Report.

This problem is not addressed in the Digital Agenda.

Furthermore, the Agenda claims "Europe needs to push ahead with the creation, production and distribution (on all platforms) of digital content" -- which is trying to solve a problem with administrative measures, rather than letting the market solve it. The conclusion that solving the problem requires "innovative business models, through which content would be accessed and paid for in many different ways" shows that the Commission still believes in the old, analogue model of dealing with copyright.

The models exist and are there: it is the copyright holders who don't want the new digital deal.

Euractiv goes on to suggest that a 100 Mbps goal by 2020 is not ambitious enough, and may actually be yet another concession -- this time to those who would block entrepreneurial investment in fiber-to-the-home (FTTH) buildouts capable of as much as 1 Gbps.

While Euractiv is smelling smoke, however, Europe is busy putting out fires, including those caused by the recent friction between France and Germany over how to address the Greece issue -- although both would exclude the EC from involvement. In a Financial Times editorial Tuesday, Charles Grant suggests the fragmentation these countries are causing endangers the entire Single Market plan: "In Paris, and even more in Berlin, there is growing contempt for the Commission. They accuse it of interfering in too many areas and of failing to lead during the crisis. The Commission responds that policing competition policy upsets big EU members and that they do not want it to lead. The Commission's job is to promote the wider European interest, so the weaker it becomes, the greater the risk of the single market fragmenting."

3 Responses to With patent chaos and financial crisis, can the EU pursue its 'Digital Agenda?'