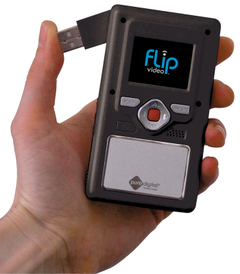 The ability to record 720p HD video has become a standard feature in the big flagship smartphones this year. The Google Nexus One, Apple iPhone 4, Motorola Droid X, HTC EVO 4G, and Nokia N8, for example, can all capture HD video.

For companies involved in the pocket camcorder business like Cisco, Kodak, and Creative, this convergence poses a threat to sales of their small, ultraportable cameras. But according to a report from Futuresource Consulting today, the consumer camcorder business has not yet begun to feel these effects.

In the 17 leading countries in Europe, the Middle East, and Africa, Futuresource actually tracked a 6% overall growth in unit sales in the first quarter of 2010, driven by big gains in France and Germany, which had 12% and 13% increases respectively. Furthermore, pocket camcorders like the Flip, Vado, and Bloggie lines accounted for 35% of all shipments.

"The continued surge in online video applications and a thirst for user-generated web video uploads...is fuelling the demand for video capture devices, [and] is also going some way towards driving sales of converged devices such as mobile phones and Apple's iPod Nano," Simon Bryant, Principal Consultant at Futuresource Consulting said in a statement today. "However, the relatively poorer quality optics - including optical zoom - and other sacrifices associated with multifunctional devices - including processing speeds, battery life, memory limitations and imaging aids - will help reduce the long term threat from these devices."

Futuresource expects camcorder shipment volumes to recover and exhibit some growth over the next three to four years, when market saturation and convergence will finally take effect.