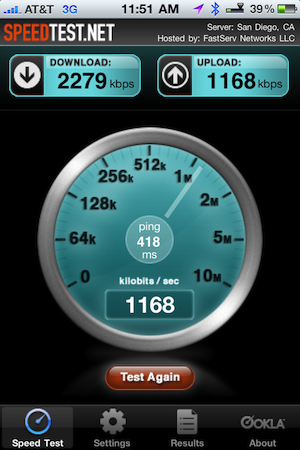 There was a whole lot of buzz over the last couple days about AT&T capping uploads over its 3G network. I decided not to post on the topic, because I had a pretty good idea why AT&T subscribers were seeing slower data uploads: The Fourth of July.

Let's use Occam's Razor for just a moment here. Is it more likely that data slowed down because of some grand AT&T conspiracy or that a larger number of people accessed the network over a long holiday weekend? Network congestion is more likely reason than evil, bastard AT&T executives conspiring to throttle down everyone's upload speeds. C`mon get a life, and a little common sense.

The screenshot above speaks for itself. I downloaded the SpeedTest app to iPhone 4 and ran it -- about 30 minutes ago Pacific Time (Story timestamp is Eastern Time). I live in a neighborhood where AT&T admits service sucks. Calls drop all the fraking time, and only one room brings up any bars and the 3G icon. Still, with crappy service, I can push up data at 1.1mbits. That's a consistent rate seen in subsequent tests, and nothing like the 100kbps caps widely reported over the holiday weekend.

MacRumors has a story about the reported upload slowdown, as it should. One of its forums hummed with posts about reported 100kbps upload limits over the weekend.

I'll say it again, short of an official AT&T response: Occam's Razor, baby. Use Occam's Razor to cut through the rumor and conspiracy suppositions.

[Update: For fun and comparison, I ran the SpeedTest app on Nexus One running Android 2.2 over T-Mobile's network. Download: 3219kbps. Upload: 1094kbps.]