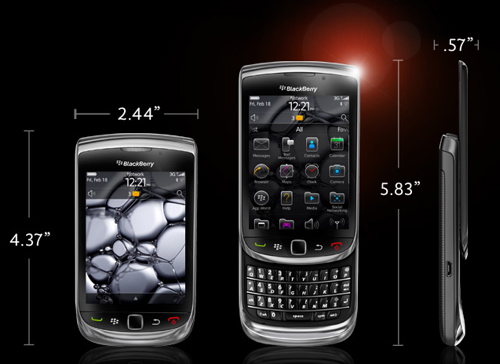 AT&T and Research in Motion Tuesday morning officially debuted the new BlackBerry Torch, the first BlackBerry to use the portrait slider form factor and the first device to launch with BlackBerry 6 OS.

After many months of unofficial reports and spy camera shots of the device, today the Torch officially went live. It features the standard BlackBerry keyboard hidden under a 3.2" capacitive touchscreen similar to the Palm Pre. It has 512MB of RAM and 4GB of built-in memory expandable via microSD, a 5 megapixel camera, Bluetooth 2.1, GPS, and 802.11 b/g/n. The wireless radios inside include UMTS: 2100/1900/850/800 MHz, and GSM/GPRS/EDGE: 850/900/1800/1900MHz.

While the form factor is certainly a point of interest for the device, most of the new functionality in the Torch is derived from BlackBerry 6. The new OS comes with a redesigned homescreen and notification system, a new Webkit Browser, universal search bar, universal inbox integrated with BlackBerry Messenger and social networks, and a new media player. RIM has been gradually showing off the new features included in BlackBerry 6 OS for several months, and finally gave the completed feature walkthrough today.

"BlackBerry 6 is the outcome of RIM's ongoing passion to deliver a powerful, simplified and optimized user experience for both touch screen and keyboard fans," said Mike Lazaridis, president and co-CEO, Research In Motion.  "Following extensive research and development to address consumer needs and wants, we are delivering a communications, browsing and multimedia experience that we think users will love, and we are thrilled to debut BlackBerry 6 on the amazing new BlackBerry Torch smartphone."