Apple can still win the mobile platform wars, but it won't be easy

The InterWeb is buzzing about Android's sudden second quarter smartphone OS market share surge against Apple's iOS and Research in Motion's BlackBerry OS. Windows Mobile was a goner last quarter. But behind the numbers is a bigger question: Which mobile platform will be more successful? Smartphones are but one small measure of success.

As I explained in the first post, "Another 'everyone else against Apple battle' is coming, with Android looking to be the better OS around which an ecosystem grows and thrives." The key word is ecosystem. "In the 2000s, like the 1980s, Apple successfully launched industry-changing platforms -- iPhone and Macintosh, respectively. Like Macintosh, iPhone's end-to-end licensing model is poised to limit the supporting ecosystem's growth," I wrote. "Meanwhile, Google, Microsoft and Nokia license their mobile operating systems to third parties. Among the three, Google's Android is the one to most closely watch."

Android's smartphone OS market share gains are simply stunning -- 10.606 million units during second quarter, up from 755,900 a year earlier. To be clear, Gartner measures actual sales to end users, not shipments to carriers or dealers. Its market share data is more meaningful measure of device or operating system sales success.

Android pushed iOS to fourth place in worldwide smartphone OS market share during Q2. "A non-exclusive strategy that produces products selling across many communication service providers (CSPs), and the backing of so many device manufacturers, which are bringing more attractive devices to market at several different price points, were among the factors that yielded its growth this quarter," Carolina Milanesi, Gartner research vice president, said in a statement. 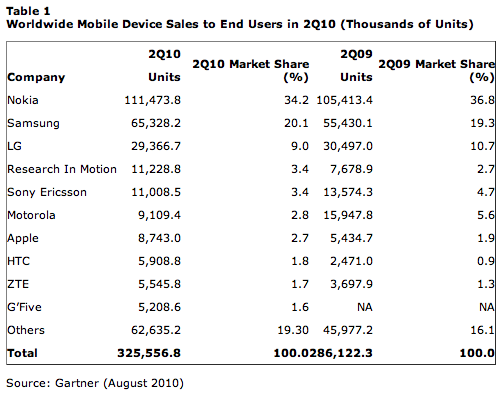 By the way, Android's smartphone OS market share gains already are sure to exceed Gartner predictions, as iOS already has done. Last year, Gartner's Ken Dulaney predicted that Android's market share would be 18 percent in fourth quarter 2012 -- 13.6 percent for iOS. Apple's smartphone OS already exceeds the number, while Android is just shy of it.

Apple's Future is Bound to iOS

Pundits already are predicting iPhone's death brattle before the great Android god. I wouldn't write off Apple just yet. The mobile wars are bigger than smartphones, as Apple already has shown. Also, market share is but one measure of success. Money is more important, and Apple rakes in nearly $600 for every iPhone.

That said, Apple can't afford to lose the mobile platform wars. During second calendar, iOS products accounted for at least 50 percent of Apple revenue -- that's an estimate, without exact iPod touch shipment data. For certain, iPad and iPhone accounted for 48 percent of revenue. The point: Win, lose or draw, iOS is now the future of Apple's success. The Mac accounted for a mere 28 percent of revenue during calendar Q2 (which was Apple's fiscal third quarter). Apple's stake in iOS is much bigger than smartphones and the operating system is hugely important to future revenue.

In the wake of iPad's sudden, surging success -- 3.2 million shipments during the launch quarter -- Apple mobile competitors are seemingly appearing on every corner. Rumors or official announcements have tablets running HP, Microsoft, Nokia and RIM mobile operating systems soon coming to market. Analysts' tablet predictions vary for 2010 -- 6.9 million, according to Consumer Electronics Association;  7 million, according to IDC; and 11 million, according to ABI Research. Apple is expected to take the majority of sales.

Competition may be just what Apple needs to stay the course and navigate past pirates looking to snatch its mobile platform booty. From a purely platform perspective, iOS is the most appealing choice. Developers get a single ecommerce-capable platform for their applications, and consumers (or businesses) get mobile products developed end-to-end from one company. Applications can run across iPad, iPhone and iPod touch, too -- another compelling benefit. However, Google is building the stronger, sustainable ecosystem around a mobile operating system. Google's only big problem is fragmentation, which is unavoidable as long as cellular carriers or hardware manufacturers control update distribution. Then there are the skins device makers like HTC and Sony Ericsson place on top of Android. Skinning fragments the user experience, even while creating better differentiation among Android-based devices.

Meanwhile, Microsoft, Nokia and RIM are all struggling to reposition their mobile OSes. Their increased competition will cause fragmentation of the broader mobile device market -- at least as viewed by developers and, more importantly, consumer or business buyers. In the smartphone market, Nokia will soon launch the N8, and Microsoft will unleash Windows Phone 7 before the holidays. During second quarter, Nokia lost mobile market share -- again -- to 34.2 percent from 36.8 percent a year earlier. However, Nokia's smartphone OS share plummeted by nearly 10 percent. Microsoft's smartphone OS fall from grace is to fifth place, during first quarter. Then there is RIM, which is debuting a new BlackBerry OS version. These three companies have much to lose or to regain in the coming months. The point: Smartphone competition will be fierce during fourth quarter.

My prediction: Increased smartphone competition is more likely to hurt Android than iOS. Then there are other mobile devices to consider, like tablets and portable media players -- or even set-top boxes and TVs. In an "everyone else against Apple battle," iOS loses if there is a single competing platform around which third-parties rally (Like DOS/Windows on PCs during the 1980s and `90s). But in a war of many, iOS is more likely a winner. Apple's end-to-end mobile products, backed by the hugely successful App Store, will stand out against the many other choices similar to one another.

However, much depends on how fast and far Android can extend to other mobile products. It's only a matter of time before the number and quality of mobile applications in the Android Marketplace rivals Apple's App Store. Applications are great, but the ecosystem is everything. Android can't become the Windows of the mobile era without both.

Even if Android does beat down rivals like BlackBerry OS, Meego, Symbian, WebOS or Windows Mobile, there is another measure of success working to Apple's long-term advantage: The business models are different. Apple derives direct revenue from iOS, by sales of hardware, software and services. Google gives away Android, indirectly deriving revenue from applications and cloud services attached to smartphones and other devices.

Apple's profit motives are much stronger than are Google's (or many of its Android licensing partners), and Apple already takes a larger chunk of mobile revenues than any competitor other than RIM. According to various analyst estimates, iPhone accounts for more than 30 percent of global handset profits, off a mere 2.7 percent market share (the latter number from Gartner's Q2 handset sales data). But, again, iOS isn't just a smartphone story. Apple sells portable media players and tablets, which combined with iPhone amount to more than 100 million iOS units sold.

I don't believe that Apple can win the smartphone wars, but there's still a chance to win the broader mobile platform device wars. It won't be easy. Much will depend on whether or when Android can beat other operating systems across all major mobile device categories. That said, if Apple's profits are scads larger than rivals', losing the market share war can still be called victory.

29 Responses to Apple can still win the mobile platform wars, but it won't be easy