On Monday and Tuesday, YouTube will begin the trial of its live streaming TV platform, which uses the live Web-broadcasting technology that YouTube has already used for events such as the presidential inauguration and E3. The unique addition to this test will be the "Live Comment" feature, which lets users directly communicate with the broadcasters during their show. 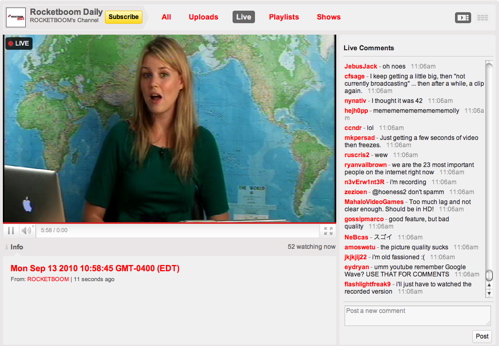 YouTube partners Howcast, Next New Networks, Rocketboom and Young Hollywood will be the broadcasters participating in this two-day trial, and the first show begins at 8am PST/11am EST. Long-running video podcast Rocketboom will be the first show to take the plunge today, and instead of the usual three-minute episodic blast, Rocketboom is expected to do an hour-long episode in the fashion of a live TV variety show.

The live streams are embedded into the partners' YouTube channels, and clicking on the schedule we've included in this article will open the channel in a new window.

Though similar live streaming services such as uStream, Livestream, and Justin.tv are already in widespread use, YouTube's viewer base is colossal by comparison. Therefore, the resources this test will demand are much greater than for those smaller sites, especially when users begin to take full advantage of the live comment system. 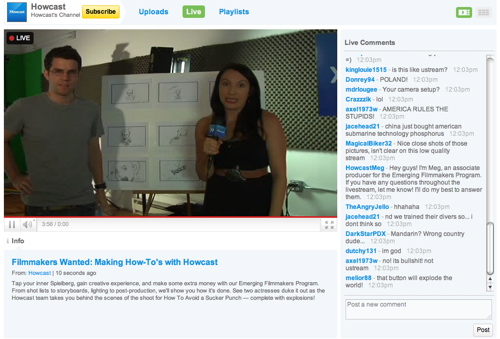 This first test is limited to full desktop browsers, and accessing YouTube on mobile devices such as the iPad will not pull up the live streams.