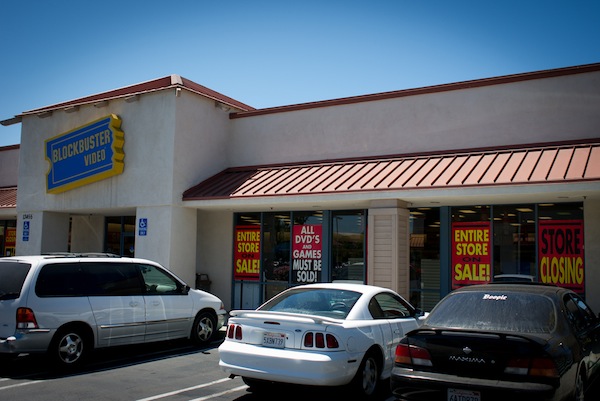 That Blockbuster filed for Chapter 11 bankruptcy protection isn't surprising. Holding out for so long is the real shocker. I expected today's filing at the beginning of 2009. This outcome was inevitable and may yet foreshadow future bankruptcy filings from other dinosaurs of the retail analog age, such as Borders Books.

But Blockbuster can't just blame digital delivery for its demise. Based on my own experience -- and surely that of others -- the movie rental retailer failed to adapt its business and technology practices to the Internet era. Blockbuster will need to do more than restructure its debt to survive Chapter 11. Executives will have to fundamentally restructure the business and most importantly the customer experience. Other armchair analyses surely will highlight the external problems, such as competition from digital content delivery and high-cost of maintaining retail stores. I'll focus on customer experience and expectations in the instant, connected era.

I started renting from Blockbuster in the 1980s. Does anyone remember, gasp, VHS tapes? I switched to DVD rentals in 1999. In February, I purchased a refurbished PowerBook from PCConnection. At the time, only Apple shipped DVD players on laptops. The same month, I signed up for Netflix, which started renting DVDs by mail about 10 months earlier. I watched my first DVD, "Armageddon," on that PowerBook (which was my first Mac laptop). I cancelled my Netflix account for a few weeks in early 2000. So the service considers me a member since April 2000, although my rental history shows February 1999.

Netflix embraced DVDs before Blockbuster, but the newer rental service was hardly the new instant. Blockbuster stores provided quick rentals -- just drive and try -- while early on Netflix rentals could take as much as a week to arrive. But by the mid-Noughties, Netflix had greatly reduced shipping time to a day or so, and its subscription service proved more affordable than Blockbuster's by-the-disc rentals (Netflix started monthly subscriptions in 1999 and did away with per-disc rentals the following year).

In summer 2004, Blockbuster started offering a mail-order DVD service ala Netflix. I waited for 18 months to fully try the service, after reading that Netflix was delaying, or "throttling," DVD shipments to high-volume customers. In February 2006, I posted to my personal blog (the post is archived but not currently online -- it's coming back!):

Blockbuster offers a hybrid alternative -- three DVDs for $18 a month, similar terms as Netflix. But there's an extra: coupons for a weekly free rental from the store. Local sounds like a good idea, right? Blockbuster store is just 2 kilometer. My daughter and I rented this weekend, using our coupon, in what felt like oh-so 1986.

Uh, Blockbuster's computer system must be circa 1986, too. Setting up an online account took less than five minutes. Pick a user name and password, enter name, address and credit card number and the process is done. The store sign-up took much longer. First, the online and store computer systems aren't linked! My new account -- really my old test one from last year reactivated -- couldn't be accessed from the store. I had to signup for another account. Worse, the clerk handed me a paper form, which meant he would have to manually rekey all the information. Absurd!

Ah, yeah. The customer experience was simply horrible. I cancelled the Blockbuster account within a month. I returned a couple times in the years since to see if Blockbuster had improved the experience. Nope. During much of the mid-to-late Noughties, Blockbuster posted quarterly financial losses, as it struggled to compete with Netflix. In second quarter 2010, Blockbuster posted a $69 million net loss.

Meanwhile, Netflix started streaming some movies and later TV shows. Suddenly there was a new instant, and Netflix wasn't charging extra for it. Most subscription customers qualified for free streaming. More: In January 2008, Apple announced movie rentals from iTunes Store. Apple and Netflix services weren't innovative for their immediacy -- cable companies offered pay-per-view movies for years. But Apple and Netflix services provided access to older catalogs of movies. In March 2008, Hulu opened to the public, offering free TV streaming and some movies. More than two years later, July 2010, Hulu ranked second to Google sites (including YouTube) for minutes-watched per U.S. viewer, according to ComScore.

All that said, while Blockbuster's business sags in the Unites States, there's still strength in many international markets, where brick and mortar operations beat by-mail rentals. But streaming and download rentals can unravel Blockbuster's overseas operations, depending on how quickly some local regulations change or fatter broadband pipes become available. This week, Netflix opened operations in Canada, signaling eventual expansion to more countries.

From a customer experience perspective, many digital streaming/download rental services offer more than movies, and more of these services are moving from the PC to the living room. Their hallmark is something Blockbuster used to be well-known for: Convenience. As a digital consumer, I don't use Blockbuster services because they're not convenient enough -- and, damnit they should be since Blockbuster could leverage its stores and online service, something Netflix can't do but Walmart already is (for example, offering TVs supporting its immediate rental service).

Oh, do convenience and viewing satisfaction matter. Last night I watched the new "Hawaii Five-O" from CBS' Website. Technically, the HD streaming delivered. But there were too many fraking commercials. I'll not be streaming any programs from CBS anytime soon. I would rather have paid 99 cents to rent from iTunes. Oh, right, CBS doesn't offer rentals at iTunes, nor does NBC Universal, which has taken a bizarre position. This week, NBC Universal CEO Jeff Zucker said that 99-cent iTunes rentals "devalue our content." Really? Streaming for free doesn't? If it's free now, 99 cents adds value to the content -- or am I living in some alternate universe where they do basic math differently?

Zucker's statement is strange for another reason: NBC Universal has been at the forefront of offering streaming content, and not just with Hulu. Back in 2004-2005, NBC Universal's Syfy (previously known as SciFi) network broke into limited streaming after observing the strange benefits of pirating. Mindjack's May 2005 story on BitTorrent trading of "Battlestar Galactica" episodes is a harrowing tale of piracy boosting TV viewership. "Battlestar Galactica" aired in the United States before the United Kingdom, making its way to BitTorrent in the between time. Mark Pesce explains the outcome:

While you might assume the SciFi Channel saw a significant drop-off in viewership as a result of this piracy, it appears to have had the reverse effect: the series is so good that the few tens of thousands of people who watched downloaded versions told their friends to tune in on January 14th, and see for themselves. From its premiere, "Battlestar Galactica" has been the most popular program ever to air on the SciFi Channel, and its audiences have only grown throughout the first series. Piracy made it possible for 'word-of-mouth' to spread about "Battlestar Galactica."

Somebody saw the benefits of online distribution. In a July 2005 post to my JupiterResearch blog I observed that "SciFi Channel had posted the entire 'Battlestar Galactica' first-season finale on the Web...Not only do I see the full episode stream as good promotion for season two, but maybe good response to file traders that have made many episodes available via BitTorrent." Full-episode TV streaming was pretty novel in early 2005. Heck, YouTube hadn't yet opened to the public (but would later that year).

That's my 1,400-word diatribe on the demise of Blockbuster, which isn't dead yet but badly wounded. What's your take on Blockbuster's customer experience, and what do you want most from movie or TV show rental/purchase services? Please answer in comments.