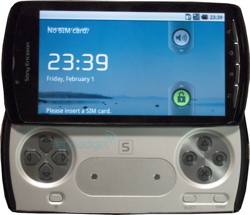 Tech blog Engadget got its hands on some photographs of a device purported to be a prototype "PlayStation Phone" from Sony Ericsson. The phone is a landscape slider that bears a strong resemblance to the PSP Go when opened, and instead of Sony's XMB interface, it will supposedly run Android 3.0.

As expected, Sony Ericsson would not comment to us on the photographs this morning, but Engadget apparently has a decent source of information, and they have been getting exclusives on the device since August.

Of course, rumors of a PSP Phone or PlayStation-branded phone from Sony Ericsson have been circulating since 2007, when the joint venture filed a patent application for a gaming phone. Sony Ericsson has produced a number of feature phone lines based upon Sony brands, including Cybershot, Walkman, and Bravia, and it seemed logical that a PlayStation phone would be next.

In June 2009, Japanese business journal Nikkei Shimbun said Sony had plans to set up a PSP Phone development team made up of Sony Ericsson and Sony Computer Entertainment employees. If development of the device started at that time, a functioning prototype right now would not be too outlandish of a thing for the team to have. Unfortunately, it's all still speculation for everyone who hasn't gotten their hands on a prototype.

If the phone is real, it certainly opens a few topics up for discussion. For example, the historical missteps taken in the field of video game-specific feature phones, the effect Apple's iOS has had on the perception of how mobile gaming is meant to be done, Android's continued reputation of having no good games in its roster of more than 100,000 apps, and the vast number of Android forks that developers must accommodate.

Though Sony Ericsson has recently lost mobile device market share, it remains one of the top five handset manufacturers in the world, and its contributions to the Android business have been both elegant and unique.