Google on Tuesday announced yet another upgrade to its search results pages intended to provide more information so that users don't haphazardly click away: Instant Previews. These previews are as simple as a small magnifying glass icon next to a search result, which users can click upon to see a visual snapshot of the linked site. These snapshots may also include search terms highlighted in orange where they appear in the resulting page. That's about it. 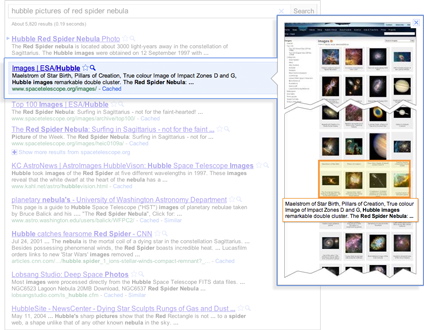 It's an understandable concept, and Google said on Tuesday that the feature increased users' satisfaction with search results by about 5% in internal testing.

"We realized early on that this kind of experience would only make sense if it was lightning fast. Not long ago simply downloading an image could take 20 or 30 seconds, and even today many websites take four or five seconds to load," Raj Krishnan, Product Manager wrote in the Google Blog today. "With Instant Previews, we match your query with an index of the entire web, identify the relevant parts of each webpage, stitch them together and serve the resulting preview completely customized to your search--usually in under one-tenth of a second."

This new feature follows September's introduction of Google Instant which completes searches while they're being typed into Google's search field, with the goal of significantly reducing time spent searching.

Google Instant Previews will be launched in the coming weeks, but can be tried out in Google Labs today.