One year ago, Google gave the world its first look at Chrome OS, a project taking a new approach to thin clients and terminal computing. The long and the short of Chrome OS is: if the browser is the most-used application on a PC, why would you load it down with anything else?

Chrome OS focuses on computers that are permanently connected, where all apps, data, and user identities and desktops are stored in the cloud. The computers running the OS are designed to be as unencumbered by software as possible, so they can run quickly and reliably. Businesses can run them in secure private clouds just as well as consumers can run them on the public Web.

The project has come to the point where it can start to be tested in the real world, and Google today announced some crucial details about who will be making Chrome notebook computers, when the public can expect them, and how they'll ultimately work.

First, of course, comes the pilot program, which will test the viability of a "Web only" computer among both enterprises and individuals. Already, businesses such as American Airlines, Appiro, Cardinal Health, Kraft, Logitech, Virgin USA, and even the Department of Defense have contacted Google to be included in the pilot. Individual users, however, can apply to test out Chrome OS on the reference hardware at http://www.google.com/chromeos/pilot-program.html.

What will testers be handling? An unbranded notebook computer called the Cr-48. 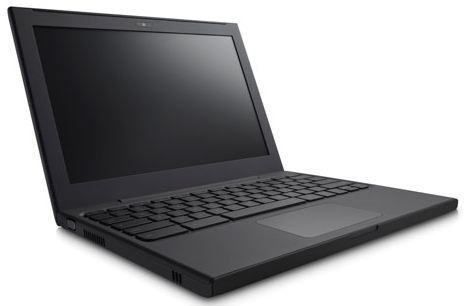 It's got a 12.1" display, full sized keyboard, oversized touchpad, World Mode 3G connectivity via the Qualcomm Gobi chipset, 802.11n dual-band Wi-Fi, an 8+ hour active battery life with an estimated 8+ hours of standby, a built-in webcam, no spinning hard drives, and a built-in "jailbreaking mode." Google today announced Acer and Samsung as OEM partners, and they will be releasing Chrome OS notebooks in mid-2011. They're all powered by Intel chips, so there's no ARM-based instruction sets here. Unfortunately, the exact chip family and power ratings weren't disclosed today. 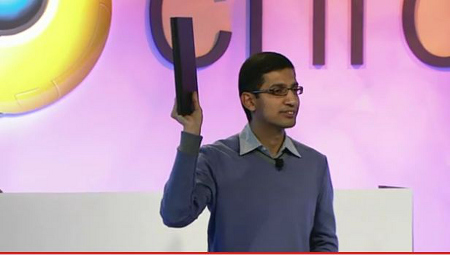 Sundar Pichai, Vice President of Google Chrome Product Management holds one of the notebooks used in the pilot program.

One of the most interesting parts of the Chrome OS notebook will be its focus on connectivity...FREE connectivity. Google has partnered with Verizon Wireless to offer Chrome notebook users special no-contract data plans. The Verizon Wireless Chrome OS data plan will have 100MB of free data per month per user. Daily unlimited data passes will go for $9.99 per day, and other plans will be sold 1GB at a time.

The pilot program will go for about half a year, at which point the first generally-available models will go up for sale. Other OEM partners are expected to be announced in the coming months.