At the next open FCC meeting on December 21, the first order of business will be the Open Internet Order, a revision to the FCC's Net Neutrality policies that have sprung from the nearly seven-year old doctrine on preserving internet freedoms by former FCC Chairman Michael Powell.

With net neutrality policy coming to the forefront of the FCC's agenda in just a matter of days, it's only fitting to hear how former Chairman Powell assesses the state of net neutrality.

At a symposium held by the Internet Innovation Alliance in Washington DC Tuesday, Powell aired concerns that regulation has simply taken far too long.

"I have to say, right after President Obama's election, there was moment of great opportunity in which the public and the industry were galvanized in commitment to public and private partnership to drive broadband availability and access, and to drive increases in adoption. This took the form, of course, of the National Broadband Plan, for which I really do give great compliment to Chairman Genachowski and the FCC," Powell began.

"In my opinion, unfortunately, we seem to have fallen off the track in the last year, and I think that for the better part of the year, regrettably...we have been stuck in a neverending debate over net neutrality. Rarely in my time in communications have I ever seen so much time and energy spent on so modest a gain."

Powell says it's time for a reset, and that it's time to reconsider how lightly the Internet is regulated, if at all. 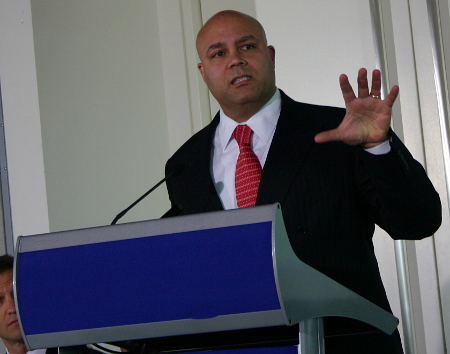 "I think we should go back to a commitment that the presumption should be against regulating an Internet ecosystem without clear and compelling justifications for doing so," Powell said.

Powell had to clarify that he wasn't pandering to "some kind of Tea Party ethos," and it wasn't just haughty political discourse, but that it is necessary in the fast-moving reality that is the high-tech economy.

He pointed out that it's taken just fifteen years for giant telecommunications companies to completely dissolve and be supplanted by companies offering newer technologies.

"When I first started in the FCC, fear of the market power of long-distance [telephone] companies was much more significantly percieved than any other types of company. Where are those companies now?" Powell asked.

Furthermore, Powell said that existant telecom policy can simply not be applied to the Internet, which is a "system of ever-evolving, organic undulation," not the easy-to-follow telephone system, which had 60 years of regulation behind it when the Telecommunications Act of 1996 was laid down. Therefore, Powell said he considered the potential reintroduction of Title II regulations to be the "most fatal of errors."

In the end, Powell concludes that it's undoubtedly positive that the regulations are coming up for review in the FCC soon, but progress toward an actual resolution can unfortunately not be assured, given the strong disagreements regulators still have.