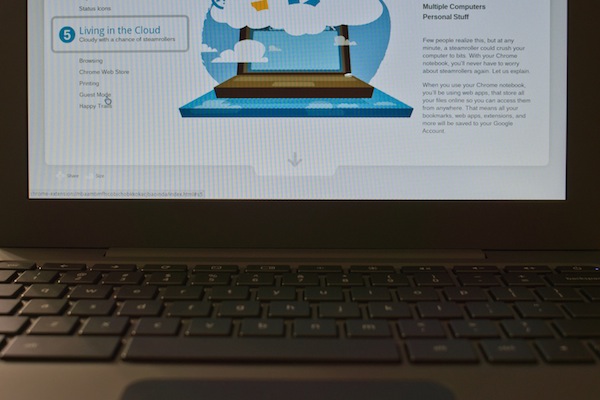 I've spent the last six weeks living the serene computing life, like being back on a Maine farm, with dusty roads, upward-reaching pines and Milky Way spanning night skies. Switching from the 11.6-inch MacBook Air to Google's Cr-48 brought back city congestion and bursting neon signs. Adobe Flash is back in my life, and it's hurting my Chrome OS experience.

Google doesn't plan on ever selling the Cr-48 or anything like it. But the laptop is a reference design for PC OEMs to follow. I presume that six months or so from now, commercially shipping models will have faster processors and better something. Surely Chrome OS will shape up in the interim, too. But I must evaluate based on the reference design and software available now; Google wants feedback, and testers like me are supposed to give it. Simply put, Flash sucks.

Flash Video Is Not

Chrome OS running on the Cr-48 feels fast enough, except when it doesn't. Generally, it doesn't when even one tab is open to a page with Flash ads. Rotating Flash ads are the worst performance suckers. The little frakkers are seemingly everywhere. I had forgotten because MacBook Air's Safari browser doesn't come with Flash, and I refused to install it.

On Day 1, I went to YouTube and watched Sara Bareilles' "King of Anything" music video in full-screen mode. The video played smoothly and sounded good. On Day 3, I casually conducted another test expecting similar results. I went to Hulu and chose December 11th's "Saturday Night Live." The video played in spurts -- totally unwatchable -- even small size, although audio was clear enough. What the frak? I replicated similar behavior. Perhaps Chrome OS is optimized for YouTube or, even, gasp signaling HTML5 video instead of Flash. All I know, where I can identify video content as Flash, performance disappoints at best.

Now compare this to iPad, which offers Hulu Plus as an app. I watched the same clip on iPad, where it looked and sounded great. By the raw hardware specs, Google's unbranded laptop should do as well or better. But there are other considerations. In a Cr-48 review posted today at the Droids, Ryan Trevisol sizes up Flash video performance:

Let's talk about Flash. It's been mentioned numerous times that Flash sucks on Chrome OS. For Flash video, it does, to the point of being unusable. However, other flash-intensive uses are plenty usable...The thing to remember about Flash on Chrome OS is that it's built on Linux, and Linux doesn't have a hardware-accelerated h.264 API, meaning it can't use CPU or GPU hardware directly to decode most Flash video. Adobe has acknowledged this, and I'm sure in future versions of Chrome OS we'll see performance improvements.

In terms of Chrome notebooks specifically, as with many aspects of the device, Flash Player 10.1 support remains a work in progress. Video performance in particular is the primary area for improvement and we are actively working with the engineers at Google to address this. Enabling video acceleration will deliver a more seamless experience on these devices...The work we're doing on acceleration for video in Flash Player is a top priority because the vast majority of video on the web is delivered using Flash.

Sucking Up the Battery

Perhaps, there will be better video performance someday. Even so, Flash video is hardly the only problem. On Day 2, I signed up for Pandora and started streaming music. The service requires Flash to use, and pesky Flash ads continuously run. Before the first song played the length of an iTunes sample, battery at 73 percent charge immediately dropped to 4 hours 23 minutes remaining from more than 7 hours. Soon as I closed the Pandora tab, battery time remaining jumped to 5 hours 17 minutes, then 5 hours 57 minutes before topping 6 hours 20 minutes.

For comparison, on Day 3 I started up MacBook Air and unplugged the power. Charge remaining: 4 hours 28 minutes. I opened up Pandora in Google Chrome and started playing music. Within 10 seconds, charge remaining time dropped to 2 hours 20 minutes. Whoa. Results might vary -- perhaps even be better -- in other browsers. Only Chrome matters here because Flash is baked into Google's cloud-connected OS.

So I wonder why Google is pushing Flash and if perhaps Apple has a point after all. One of Apple's major Flash gripes is battery consumption. Another is the user experience, which Apple Steve Jobs has faulted. But Chrome OS is supposed to be all things Web, and right now Flash is very much apart of the Net-connected experience. More significantly, many of the Rich Internet Applications Google should want Chrome OS users to have require Flash.

I've been a happy camper running Safari on MacBook Air without Flash. The browser is more responsive, and I'm less distracted by the ads while reading, which increases retention. I hadn't realized how annoying are Flash ads, until going without them for nearly two months. More significantly as someone trying to evaluate Chrome OS, I'm appalled by how much Flash negatively affects the experience. As expressed earlier. Chrome OS performs well when it doesn't, and when it doesn't Flash usually is the reason.

Day 4 will focus on my life in the cloud and using applications there who the cloud is for. If you're up in the Chrome OS cloud, too, please share in comments about your Cr-48 user experience.

38 Responses to A week with Google's Chrome OS laptop, Day 3: Living with Flash