Should Apple stop selling software in its retail stores? 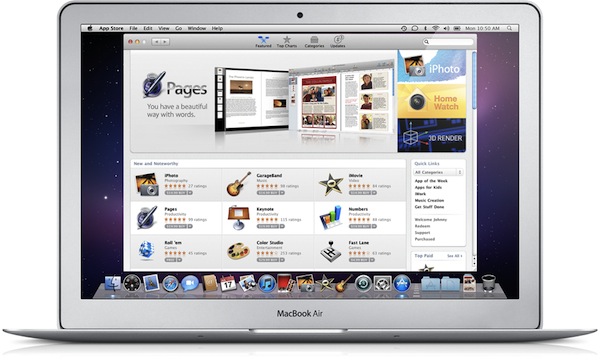 It's the question to ask with the Mac App Store launching in one week. Software takes up valuable shelf space Apple could use for other things, particularly in many of its smaller boutique-sized shops. I've asked Apple PR if the company plans to stop selling software at its retail stores but received no answer before posting.

Apple is notorious for pulling the plug on something and pushing the consumer market forward, whether or not it's ready to move. I remember when in 1998, with launch of the Bondi Blue iMac, Apple removed legacy ports, shifting to FireWire and USB. A decade later, Apple ditched the internal optical drive on the original MacBook Air. The newer model replaces the hard drive with solid-state storage. There are many other examples and some quite displeasing to consumers, when Apple releases something new incompatible with what its customers already have.

Should digital download delivery only be the next push?

The Mac App Store offers many advantages developers can see from selling applications through iTunes for iPad, iPhone and iPod touch. Among the other advantages:

6. Developers can easily get digital shelf space -- and, therefore greater exposure -- where they might not get retail shelf space at all.

Would Apple be so bold regarding software, by making the Mac App Store its sole distribution channel? It's not like Apple runs a record shop, selling CDs. There is iTunes for that and for selling mobile apps. Surely the developer benefits are compelling.

"I can't imagine them doing that," says Stephen Baker, NPD's vice president of industry analysis. "I suspect they would lose a lot of support from the major third-party software producers." Oh, yeah? But no one complains about selling mobile apps digitally.

"I think the genius of any app store for mobile was that it puts all the products together in one place for people to find, that was the challenge for mobile," he responds. "For computers we already had that, it is called a retail store. So yes, I think apps for a computer is just another name for a DDL [direct download] store."

Baker backs up his assertion with some convincing numbers. First, he concedes, people do buy software online -- about three-quarters of US computer users. "Of that, about one-third were subscription renewals, one-quarter were digital downloads and one-quarter were CDs," he explains. So while the majority of computer users have purchased software online, not many bought direct digital downloads.

Still, 43 percent represents a helluva lot of people, and right now Apple only needs to be concerned with Mac owners, as the store won't be available to Windows users next week. Like lemmings, so-called Macheads seem all too willing to leap over the cliff with Apple to the next big thing. No push required.

How do you buy or want to buy software? Please respond in comments.

12 Responses to Should Apple stop selling software in its retail stores?