Forrester: One-third of Americans will own a tablet PC by 2015

Forrester Research claims that one in three Americans will own a tablet PC -- that's 82 million of us -- by 2015. No wonder "Tablets look to steal the show at CES and beyond," as my colleague Ed Oswald asserted yesterday. It's no coincidence that Forrester released its tablet forecast less than two days before the 2011 Consumer Electronics Show starts.

Already, the tablet noise is growing, with Microsoft rumored to be showing off Windows-powered tablets during CEO Steve Ballmer's June 5th opening keynote. Then there are the Android rumors, such as the HTC Scribe running Honeycomb (Android 3.0).

Forrester predicts that tablet shipments will reach 24.1 million this year, up from 10.3 million in 2010. Pace of shipments will slow somewhat after 2012, reaching 44 million in 2015. "Of those sales, the lion's share will be iPads, and despite many would-be competitors that will be released at CES, we see Apple commanding the vast majority of the tablet market through 2012," Forrester analyst Sarah Rotman Epps explained in a blog post about the data.

Forecasts like this simply aren't to be trusted. Two years ago, many analyst firms made bold predictions about netbooks, which shipments instead flamed out after a bold, bright burst. I've worked as a trade analyst and can assert with some confidence that a forecast like this one is as much speculation as science, if not more.

Just look back a year, days before Apple announced iPad, when the tablet was an all but forgotten category. Then suddenly, after one then two quarters of robust iPad shipments, everybody who thought they were somebody predicted media tablet's rosy future. Two quarters of strong iPad shipments -- presumably three after Apple announces quarterly earnings later this month -- are no assurance of category success. Looked at more optimistically, shipments could be even higher, as Forrester concedes with today's report, "Tablets Will Grow as Fast as MP3 Players." The new data revises a June 2010 forecast that Sarah Rotman Epps described as "too conservative." She writes:

One major assumption that changed in our model is the replacement rate, which we think will be closer to that of MP3 players or iPhones than to that of PCs. Although they are certainly used for productivity, tablets are proving themselves to be 'lifestyle devices' at home and at work, and as such we think consumers will upgrade to newer models more rapidly than they would a more utilitarian device like a PC. In other words, we think a significant number of first-generation iPad buyers will buy iPad 2 when it comes out this year -- many first-gen iPads will end up entertaining the kids in the back of the car while Mom and Dad get the shiny new (likely Facetime-compatible) model.

The analyst isn't as optomistic about "Android tablets, Research In Motion's BlackBerry PlayBook, Microsoft's Windows-based tablets and tablets that run on HP's and Nokia's platforms -- they'll take a backseat to Apple. But in a market this big, there's room for more than one player." 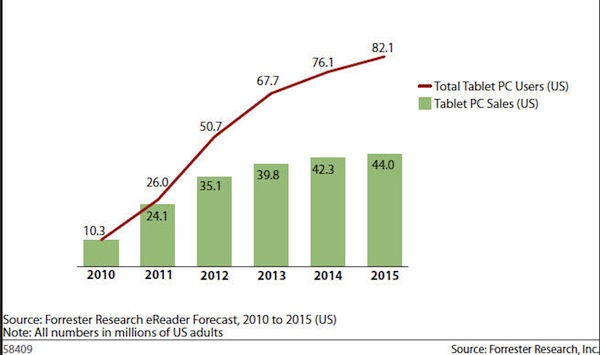 Oh yeah? It looks to me like she's already pegged Apple the winner. No one should underestimate what Apple MP3 players mean for iPad, and there any comparison makes sense. Apple built up diverse accessory manufacturing, retail and third-party developer channels supporting iPod that later benefitted iPhone and now iPad. This unified ecosystem is sure to present challenges to a fragmented field of tablet competitors.

All that said, Amazon and Barnes & Noble both reported record holiday sales of their e-book readers, which are another flavor of media tablets, too. They also are "lifestyle devices." The point: It's too early to forecast anything reliable about the media tablet market. Netbook forecasts should be a lesson for anyone trying to suss out the tablet's future. Even smartphone forecasts are revealing. No major analyst firm forecast Android's huge market share success even six months after the Google G1 shipped on T-Mobile. Two years after G1's launch, Android shipments have shamed major analysts' early iPhone forecasts.

14 Responses to Forrester: One-third of Americans will own a tablet PC by 2015