ComScore: Verizon iPhone is likely bad for AT&T, probably not for Android 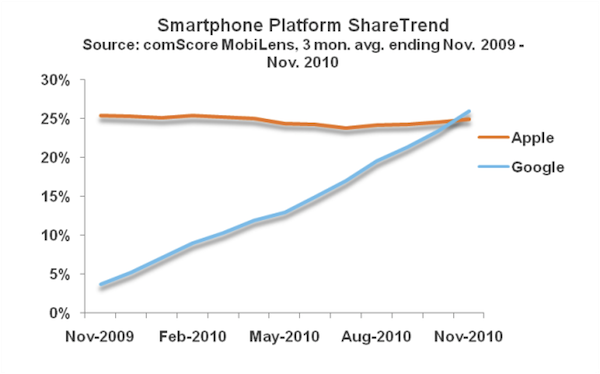 On the heels of Canalys' report that Android has nothing to fear from Verizon iPhone, ComScore released its own analysis. The question ComScore wouldn't answer is the one everybody seems to be asking: Will many AT&T customers jump carriers for Verizon iPhone? The answer may be moot, because of recent Verizon subscriber gains against AT&T in the market for smartphones.

AT&T's US smartphone market share is 38 percent compared to 27 percent for Verizon; and, of course, iPhone is a major reason. But Android upset the balance in 2010, the first full year after Verizon introduced the Droid line of smartphones. AT&T's smartphone share declined by 7 percent, while Verizon's grew by 4 percent.

"Throughout the year iPhone has seen its penetration remain relatively unchanged, hovering at 25 percent share throughout the year," writes Sarah Radwanick in a ComScore blog post. "(It should be noted that the iPhone's installed base has certainly grown, but its share of the market has remained more or less stable.) The iPhone Verizon deal will no doubt bring even greater competition to the smartphone arena throughout the coming year as Android, iPhone and RIM jockey for the leadership position."

In in three months ending in November, Android market share among US subscribers nudged ahead of iPhone, 26 percent to 25 percent, respectively, according to ComScore. BlackBerry share was 33.5 percent.

Many commentaries and punditries written over the last week assert that AT&T subscribers will jump carriers to get Verizon iPhone. The actual number is a guessing game. But ComScore asserts the value isn't how many but who they are. These AT&T-to-Verizon switchers "represent attractive brand consumers," Radwanick writes. Users of iPhone tend to be younger (18-34) and "often represent higher income brackets, with 81 percent of users having a household income of at least $50k and 47 percent of users reporting a household income of at least $100k." Hehehe, this where some of our readers can stop and comment about how much more Apple stuff costs. :)

Wireless carriers fret a lot about churn -- that is people moving from one carrier to another. It's one reason why AT&T and Verizon have instituted hefty -- as in more than $300 -- early termination fees for smartphones. A high number of iPhone users (54.6 percent) have been subscribers to the same carrier for more than three years. How ironic if a large number of iPhone users switch carriers for the same smartphone.

"Although it's too early to tell exactly how consumers will react to the Verizon iPhone announcement, it is fair to say that this deal represents a potentially significant turning point in the ascendance of the smartphone market," Radwanick writes. That's a rather bold assertion. I would argue the turning point came in the US market when Verizon launched Droid in autumn 2009. Globally, another turning point came 12 months ago when Google released Nexus One, providing hardware manufacturers with a reference design and software developers a crapware-free device running the newest Android version of the moment.

Verizon now adds iPhone to its large stable of Android handsets and BlackBerries. Based on ComScore's "Smartphone Platform ShareTrend" chart (above), it's difficult to perceive anything slowing down Android's growth against iPhone.

"Only time will tell which carriers and platforms will emerge as the market leaders, but it's clear that right now the consumers are winners as they gain yet another option when making their smartphone choice," Radwanick writes.

42 Responses to ComScore: Verizon iPhone is likely bad for AT&T, probably not for Android