Canalys: Android tops Symbian in smartphone shipments -- twice as many units as iPhone

The year "2010 has been a fantastic year for the smartphone market," Chris Jones, Canalys principal analyst, said in a statement. "But vendors cannot afford to be complacent; 2011 is set to be a highly competitive year with vendors looking to use new technology, such as dual-core processors, NFC and 3D displays, to differentiate their products and maintain value."

Regionally, Europe, Middle East and Asia were the strongest markets for smartphones -- 38.8 million units, for a growth rate of 90 percent. While Nokia led EMEA, it ceded market leadership in Latin America to Research in Motion, which shipped about 1 million more units partly based on the popularity of BlackBerry Curve and other mid-range smartphones. Among Asian countries, South Korea smartphone shipments soared to 3.4 million units, up from 700,000 a year earlier. Smartphone shipments to China grew 134 percent year over year. Nokia's market share in the country plummeted -- to 56 percent from 76 percent a year earlier, despite 70 percent growth in unit shipments. 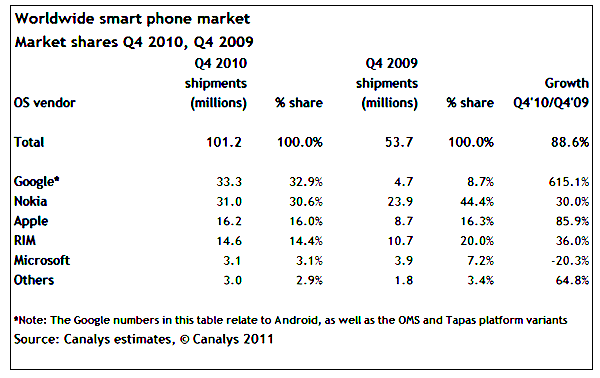 "Android was by far the largest smartphone platform in the US market in Q4 2010, with shipments of 12.1 million units -- nearly three times those of RIM's BlackBerry devices," Tim Shepherd, Canalys analyst, said in a statement. But changes are afoot.

"The US landscape will shift dramatically this coming year, as a result of the Verizon-Apple agreement," Shepherd said. "Verizon will move its focus away from the Droid range, but the overall market impact will mean less carrier-exclusive deals, while increasing the AT&T opportunity for Android vendors, such as HTC, Motorola and Samsung."

Existing Verizon customers can begin placing iPhone 4 orders on February 3. The smartphone officially launches a week later. Canalys' position on the Verizon iPhone's impact in the United States doesn't bode ill for Android. Earlier this month, the analyst firm said that Android shipments would grow twice the rate of competitors, largely unaffected by Apple making iPhone available through a second US carrier.

25 Responses to Canalys: Android tops Symbian in smartphone shipments -- twice as many units as iPhone