It's a photo finish: Android, BlackBerry and iOS are tied in US smartphone share 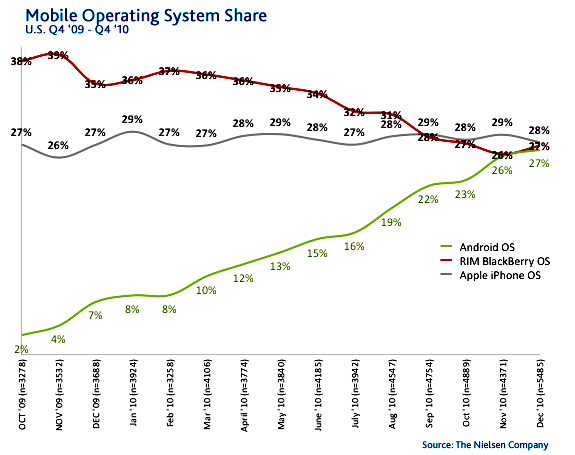 Which smartphone operating system truly leads the US market. According to Nielsen, none of them. Says Don Kellogg, Nielsen's Telecom Practice Research and Insights senior manager, it's a "three-way tie" between Apple's iOS, Google Android and Research in Motion's BlackBerry OS. Oh, man, it is going to be a bad day for fanboy jockeying for position.

Nielsen strips back any potential contention about unit shipments and focuses on install base. By that measure, among US smartphone owners, 28 percent have devices with iOS and 27 percent each for Android and BlackBerry OS (data is from December 2010). But as the chart above shows, the long-term trend is revealing. Since February 2010, iOS has remained largely flat, with sine-wave like fluctuations between 26 percent and 29 percent install base share, that despite the June 2010 launch of iPhone 4. During the same time period, Android's install base steadily rose from 8 percent share. Meanwhile, BlackBerry OS has steadily declined -- from 39 percent share measured by install base.

The longer-term trend syncs with another Nielsen observed last month -- in December, 43 percent of recent smartphone purchasers bought an Android phone compared to 26 percent for iPhone. For some perspective on why Android is gaining now, please refer to my October 2009 post: "Apple cannot win the smartphone wars." However, BlackBerry nosed down after iPhone 4 launched, with percentage among new purchasers dropping from 35 percent in June 2010 to 20 percent in December.

The demographic data is by far the most interesting and useful, particularly for cellular carriers planning their marketing programs. But Nielsen doesn't provide other demographic measures. Which ethnic group is more likely to have data or choose 4G over 3G?

But news of the day will be the three-way tie. Android is sure to nudge ahead of iPhone when Nielsen updates the data, thanks to the surge among new smartphone purchasers. But iPhone is coming to Verizon on February 10. This horse race isn't over yet.

15 Responses to It's a photo finish: Android, BlackBerry and iOS are tied in US smartphone share