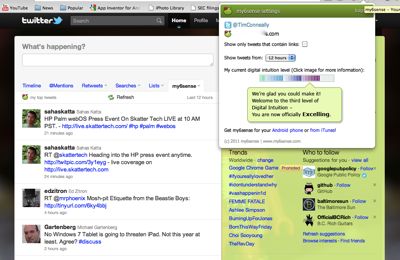 How many people can you follow on Twitter and not lose information? It's been a subject of discussion for years, which prompted Twitter to launch list-based filtering back in 2009. Indeed, there are many third-party applications to help users organize and filter the potential Twitter overload.

my6sense decides what is most relevant to you based upon all your prior behavior on Twitter (links you've clicked on, tweets you've favorited or retweeted, and your commonly-used keywords.) What's more, it deeply scans links for keywords and relevant information as well, so even if someone posts a URL-shortened link with no related text, it will look for relevant information. Naturally, not everything will be scannable by the extension, so it's not perfect.

The new extension is available freely to all Google Chrome and ChromeOS users, and can be obtained at my6sense.com/twitter.