Verizon iPhone launch is a bust, as hordes of Apple Store employees wait for no one to come 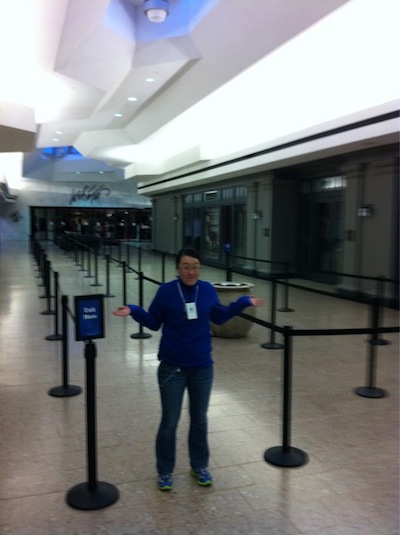 So much for the big Verizon iPhone launch: The lines are simply astonishing, as in so small you need a magnifying glass to see them. Don't blink as you walk by the local Apple or Verizon store. You might miss the people waiting to buy a CDMA iPhone 4.

Perhaps it's all those preorders.

Could it be because of bad weather across most of the country?

The phone is available in more places, including Best Buy and Walmart.

Over the last couple weeks all kinds of so-called analyst firms, with crazy-sounding names, popped up with surveys and predictions about how many people would line up to buy or switch to Verizon iPhone, and the Apple fan club of bloggers and journalists gobbled it up. Three days ago, Bob Brown wrote at Macworld UK: "More than a quarter of AT&T customers and about a quarter of Verizon customers say they are willing to wait in line on Feb. 10 to switch over to Apple iPhones that will run on Verizon's 3G wireless network. This according to an online panel survey of 700 smartphone users conducted by market researcher uSamp."

Oh yeah? Take a look at Business Insider's gallery of lines for a realistic look at who really braved the storm to buy Verizon iPhone. Dan Frommer's headline says it all: "Verizon iPhone lines are laughably short." CNET News.com's photo gallery from Apple's Manhattan store is perhaps more startling. Hey, is that a Fox News crew with no news to cover?

At the Apple 2.0 blog, Philip Elmer-DeWitt used the same uSamp survey to assert in the headline "44 percent of Verizon Android users likely to switch to iPhone on Day One" and in the deck "for Blackberry users it's 66 percent." Over at Mashable, Jodie O'Dell crunched the uSamp numbers differently: "Altogether, 54 percent of the Verizon-using, smartphone-owning respondents said they planned to switch to the Verizon iPhone."

Sure, Verizon sold out preorders in just a couple of hours but never said how many. JP Morgan analyst Phil Cusick estimated 500,000 preorders, which would comfortably meet projections of 1 million sales during the first week.

Analyst estimates for first year Verizon iPhone sales range from 9 million to a seemingly implausible 25 million. Not that you would know that from today's waiting lines.

Over at Pioneer Press/TwinCities.com, Julio Ojeda-Zapata asks the right question: "What if Apple threw a party and no one came?" The photos of empty lines set against hordes of Apple greeters waiting for buyers are simply embarrassing. Not that the Apple fan club is backing down. "Piper Jaffrey analyst Gene Munster was with me at the megamall, and he speculated that the Verizon-iPhone preorders may have had a great deal to [do] with the lack of queuing," Ojeda-Zapata writes. "Also, he said, it is a work day (past Apple-product launches have often occurred on a weekend)." Oh yeah? Apple offered preorders for iPhone 4 last summer and there were still massive lines. Perhaps Munster works such long hours he can't tell weekdays from weekends; the other US iPhone launches occurred on weekdays.

The good news for you, if planning to buy the Verizon iPhone, the wait will be short -- nothing like the enormous line of people who waited to get iPhone 4 from the Apple Store at Fashion Valley in San Diego.

I had planned to check out the line there today, but the mall is undergoing massive renovations that block most of the main area around the Apple Store. There simply isn't enough room for a big line to form.

Did you wait in line for Verizon iPhone? Please share your story, or better your pics in comments.

70 Responses to Verizon iPhone launch is a bust, as hordes of Apple Store employees wait for no one to come