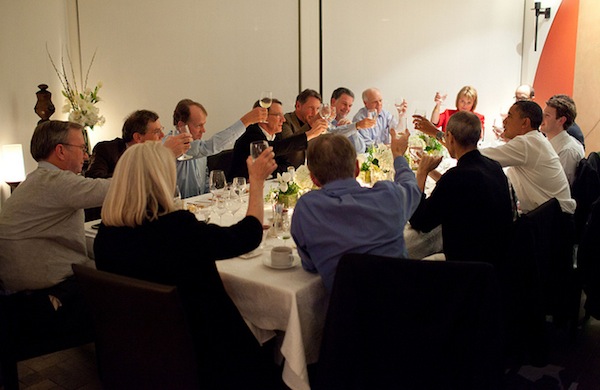 Apple can no longer remain silent about its CEO's health. This is no longer a debate about corporate responsibility or fair disclosure to shareholders. Now that Paparazzi are following Jobs and taking photos or videos of him outside the cancer treatment facility, Apple must respond. Silence is bad for Apple, bad for its shareholders and quite possibly damaging to Jobs' recovery. How would you feel about seeing your photos in the National Enquirer? How would it affect your cancer recovery?

Jobs announced indefinite medical leave from Apple on January 17. "My family and I would deeply appreciate respect for our privacy," Jobs requested. That clearly isn't happening. Yesterday, Radar Online posted a video of Jobs leaving the Stanford Cancer Center in Palo Alto, Calif. The video was shot 13 days earlier. Last week, the Enquirer published photos of Jobs outside the same facility. Out of respect to Jobs' recovery and privacy, I won't link to either the photos or video. If you want to see them, Bing or Google.

I'm on record as saying Jobs' health isn't a private matter. He works for shareholders and has ethical obligation to them to report on his ability to effectively run the company. Hell, US presidents have annual checkups, which are publicly reported. Why not CEOs of public companies? But what's happening now trumps any debate about the extent of Jobs' privacy. He has none if Paparazzi photos and videos are popping up all over the Internet.

Stories supporting both the National Enquirer and Radar Online postings emphasized Jobs' frailty. Last week, I even read some crazy analysis, based on a doctor reviewing photos, stating Jobs had something like six weeks to live. No responsible company should let such potentially damaging information about its ailing CEO go unanswered.

Apple doesn't have to disclose the gritty details of Jobs' recovery, merely fill the silence with something more than rumor or speculation. Perhaps, it's time for an official Steve Jobs blog or Twitter feed. Just an occasional tweet from Jobs would drive thousands of blog posts or news stories and overshadow Paparazzi-driven speculation about his health. If Apple's CEO just hinted at some future product, without disclosing anything substantive, there would be massive blogger and news media response. After all, in the January 17 email, Jobs wrote that while on medical leave he would be involved in "major strategic decisions." Jobs wouldn't need to tweet often.

Another approach: Jobs' could voluntarily make his cancer fight public, even if just partially. He's an iconic figure, who survived cancer in the mid Noughties and received a liver transplant in 2009. An occasional statement or blog post could truly inspire other people fighting cancer. Apple's board and Jobs might see such an approach as distracting from the company's business, but it also could effectively distract from speculation about his health. A more public approach could generate strong feelings for Jobs, which could mitigate any negative impact to the stock should something truly terrible happened to him.

Normally, I would recommend that Apple finally disclose a succession plan should Jobs not return as CEO. But that's not easily done now. If Apple revealed a succession plan so close to the release of Paparazzi photos and videos, there would likely follow more speculation that Jobs' health is declining faster. Succession plan disclosure is not an option at this time. Instead, Apple should begin a subtle campaign promoting COO Tim Cook, who is running day-to-day operations during Jobs' absence. The purpose: To further build up investor confidence in Cook, should Jobs suddenly need to step down or even die.

Apple is renown for its marketing savvy and knack for managing perceptions. Unanswered, these Paparazzi photos and video create a negative perception -- that Jobs' is much sicker than the company has revealed. If there's money to be made here, more Paparazzis will line up to capture images or videos of Jobs. Apple can't rely on the goodwill of photographers and videographers using Macs and products like Aperture or Final Cut Studio. Somebody will follow the money shots, which already is happening. Nor can Apple rely on the goodwill of investors, which have yet to punish the stock.

They say silence is golden. I say absolutely not.