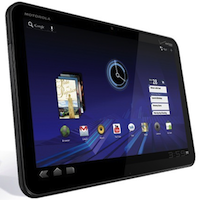 We're pretty confident you know what Xoom is by now. Stories we've run about the upcoming Android 3.0 tablet from Motorola Mobility have been some of the most popular items of the last three months.

Yesterday, just before all the advance reviews were published, law firm Morgan, Lewis & Bockius filed a trademark suit with the US District Court for the Northern District of California on behalf of San Francisco-based money transfer company Xoom Corporation.

Xoom Corp. says it has actively used the name for its website since 2003, and has an incontestable trademark on it.

"Through this long online use accessible via computer and mobile devices, Xoom's trade name and the XOOM products have become associated exclusively with Xoom. Until [the] Defendants' adoption of the Xoom brand without authorization from Xoom, Xoom to its knowledge was the only entity using the name or mark for online product offerings," the company's complaint said.

In the suit, it asks for permanent injunction and treble damages pending an immediate "temporary restraining order and/or preliminary injunction". The launch of Motorola's Xoom was scheduled for today, and the case temporary injunction has not yet been granted, so it is unclear whether consumer availability of the product will be disrupted.

It appears the majority of the complaint revolves around the financial company's website, and the potential disruption to business caused by Motorola's purchase of the keyword "Xoom" on Google and other search engines. Typing the query into Google actually reveals both companies in the sponsored links section, and the first "natural" search result is still Xoom.com.

"Xoom has long used the wording 'Official Site' in conjunction with its website…and the products and services that it offers on the site, all of which increase the likelihood that consumers will be confused and misled as a result of Defendants' unauthorized use of Xoom's name and mark on the Internet, particularly with the wording 'Official.'"