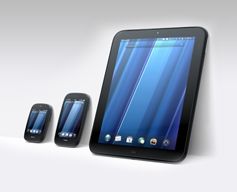 As the "consumerization" of the enterprise space takes hold, HP is going to provide products and services that can handle the needs of both the consumer and the enterprise user.

Much of this strategy will hinge on WebOS.

The future of Palm's WebOS was somewhat unclear after HP acquired Palm and former CEO Mark Hurd resigned and became the subject of government scrutiny.

However, after Apotheker took over as CEO, he wasted no time in revealing HP's plan to put the mobile operating system on PCs as well as smartphones, tablets, and printers.

In Apotheker's presentation on Monday, he delved further into his earlier remarks, and said HP is capable of delivering 100 million webOS-enabled devices into the marketplace per year. He went on to illustrate this point by saying that HP sells two printers and two PCs every second of every day. This, Apotheker said, will be the guideline for WebOS' scale.

According to the figures presented by Apotheker on Monday, HP could conceivably sell 240 WebOS products a minute. It's not implausable, as HP is the largest technology company in the world in terms of revenue, and last year, Gartner Research estimated that HP shipped 62.7 million PCs.

If every one of those PCs came with WebOS, HP would only have to sell 37 million smartphones, tablets, and printer/printer interfaces per year to reach its 100 million goal.

Of course, this is only what HP is "capable of," and not necessarily the reality it will deliver.

It's unclear how many WebOS devices are in circulation at present, but the number is undoubtedly quite low. Nielsen's tally of mobile operating system market share (Q4 2009-Q4 2010) put WebOS in the "other" category with Windows Phone and Symbian, which combined made up only 18% of the market, while BlackBerry, iOS, and Android all ran about neck and neck.

If WebOS sells at a level anywhere near what HP is capable of, WebOS' market growth will look like a vertical line on next year's graphs.