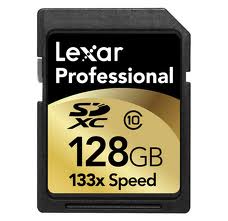 Lexar says this line of SDXC cards offers a Class 10 speed rating with a minimum guaranteed speed of 20MB per second, also known as 133x.

The current maximum speed for SDXC/SDHC is 312 Mbps (UHS-II), which was defined by the SD Association at the beginning of 2011 with the SD 4.0 spec.
The Ultra High Speed class (UHS-I), is capable of data transfer speeds up to 104 Mbps.