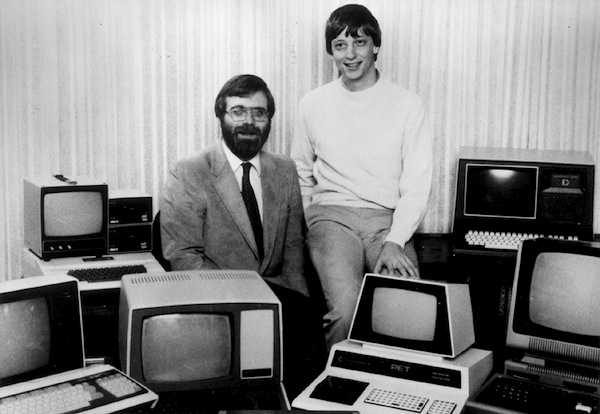 I don't know about you, but I have trouble feeling sorry if Paul Allen was cheated out of that 14th billion and stuck in the slums of 57th place on the Forbes list. Of course Paul Allen doesn't really want my pity and he's probably cool with the money he got out of his work co-founding Microsoft. They just could have been nicer to him.

An adaptation from Allen's forthcoming memoir "Idea Man" may be found in Vanity Fair. "Microsoft's Odd Couple" runs all the way from high school, where he met Bill Gates, to February 18, 1983, when he resigned as an officer from Microsoft (although he retained his position on the Board of Directors). It has already generated controversy.

An article in this morning's Wall Street Journal quotes Gates and other Microsoft vets disputing important factual claims in the book.

There is also some contention over legacy. Allen thinks his contributions early on were, and still are under-appreciated. The WSJ story specifically mentions the SoftCard, an Apple II add-in card with a Z-80 processor to let you run CP/M and Microsoft BASIC. (Click here to read the SoftCard manual.) The SoftCard was a successful product in its day, but not especially important when you look at Microsoft's history in full.

I once heard it said that the key to Gates' and Microsoft's success was that he was the first to recognize that there are economies of scale in software. It turns out this too was Allen's idea, or so he says. Microsoft was charging flat-rate license fees to OEM licensees for BASIC and MS-DOS. To maximize revenue Allen argued for a per-use royalty. Only with time would Gates and current CEO Steve Ballmer see the wisdom in this approach.

Perhaps what really stands out in the Allen story is how Gates dictates the terms of their partnership; he pushes Allen again and again to surrender parts of his share because he's not contributing as much as Gates. Twice, when Gates pushes Allen to surrender company shares to him Allen agrees because it just seems logical to him. Once, after his initial cancer diagnosis, Allen made clear that he wasn't going to work as hard at Microsoft as he had. Upset over the productivity implications, Gates and Ballmer conspire to cheat Allen out of more of his share, but Allen shames them out of it -- or so the story goes. I guess it could all be true.

One thing is obvious to me, both from the story and having worked on Microsoft products since the late 70s: People like Paul Allen don't build companies like Microsoft. You need a brilliant, driven, merciless jerk like Bill Gates to do that. A "Micro-Soft" run by Paul Allen would probably still be making add-in cards in Albuquerque.

Photo: Paul Allen and Bill Gates circa 1981, courtesy of Microsoft.