Can Android be stopped?

It's the question I'm asking after reviewing ComScore's most recent mobile market share data. One in three American smartphone users have Android -- that was at the end of February. It's April now, so the numbers are surely higher, based on the three-month trend. Holy Moly.

Two months ago, ComScore disclosed data for the three months ending in December. For that period, Android market share rose 7.3 points; 7 points during the more recent three-month period. Since the end of September, then, Android market share rose from 21.4 percent to 33 percent. To be clear: This is actual subscriber share, meaning the install base of U.S. cellular users, not units shipped over three months.

Have you noticed that Apple has started to aggressively advertise iPhone 4 on television again? Android's gains are surely a major reason, then there is launch of iPhone on Verizon.

But Apple is treading water, with iOS continuing its flat growth trend with subscriber share of about 25 percent, again -- this time 25.2 percent, up from 25 percent three months earlier. However, iPhone share rose by .09 percent, for the greatest gains among the top-five manufacturers -- that's 7.5 percent up from 6.6 percent. Samsung leads with 24.8 percent share.

ComScore surveyed 30,000 U.S. mobile subscribers to compile the data, and that's a helluva big sample. According to ComScore, 69.5 million Americans owned smartphones at the end of February, up 13 percent from three months earlier. Only Android and iOS gained share -- 7.2 points combined.

By the way, ComScore's numbers initially look good for the Verizon iPhone -- the "most acquired handset" in February. But trying to slice the numbers several ways, I don't see where they lead to 1 million initial sales, as some analysts have speculated -- and the Apple fan club of blogs and news sites shamlessly reported as fact. Remember, Apple and Verizon won't say how many units shipped, which isn't typical of an iPhone launch of this stature. 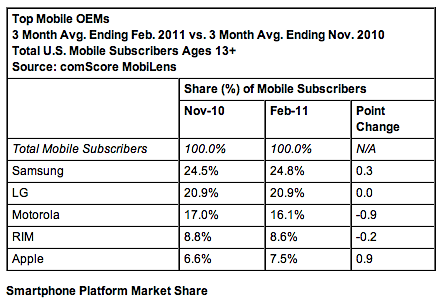 Android's smartphone subscriber gains are nothing short of phenomenal and seemingly unstoppable. That puts Research in Motion, which share declined 4.6 percent over three months, and Apple in tough spots. RIM is now entering free fall, from a platform perspective. Android and iOS are where the apps are. While Apple leads by sheer number of mobile apps, Android gains continually.

Developers typically go where the money is. As Windows PCs have shown, the platform with greatest number of users offers the largest economies of scale. Android is headed in the right direction, while RIM's BlackBerry OS is going the wrong way. Apple is consistent, which is commendable performance, but the numbers need to be bigger to win the mobile platform wars.

Can Android be stopped? Should it be? The answer is complex.

1. As the PC market has shown, standardization around a single, dominant platform is hugely beneficial. Developers can write applications once that most people can use anywhere. Standardization also is good for supporting hardware, such as peripherals. There are huge benefits to businesses and consumers and to the ecosystem of third-parties supporting the platform.

2. However, Macintosh's market share gains over the past decade show that developers and other third parties will support a second or even third platform. Since Apple opened its first retail store in May 2001, Mac's U.S. market share rose from about 2 percent to nearly 10 percent in fourth calendar quarter 2010. Mac OS X launched in 2001, with scant number of apps. There are plenty today, and there would be fewer or none if developers weren't making money.

4. Microsoft-Nokia is suddenly a wild card capable of rocking the market. As I posted two days ago, Google and Microsoft are the only direct competitors among the major handset OS developers. Android and Windows Phone are licensed by third parties -- not WebOS, Blackberry or iOS. IDC predicts Windows Phone 7/Mobile will be second to Android in smartphone OS shipments by 2015. I'm skeptical of IDC's forecast, for reasons independent of the market potential (like recent missed predictions and volatile mobile market). But if Microsoft and Nokia can get handsets to market quickly with good applications and services supported by the handset maker's huge manufacturing and distribution network, Windows Phone could put the breaks on Android -- regardless of where either ends up in the market share race. Quite possibly, rather than one gaining over the other, fiercer competition for same handset manufacturers and developers could make way for any or all of the end-to-end competitors to push ahead. 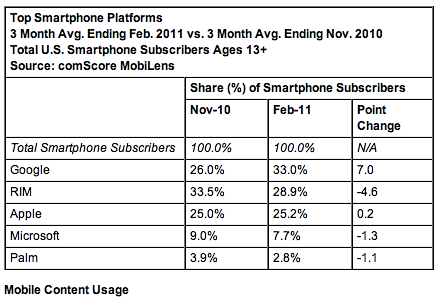 5. Android's fragmentation undermines the platform's appeal. As of April 1, only 2.5 percent of Android devices ran the newest versions -- 2.3 or 2.3.3, according to official Android Developers stats; that's up from 1.7 percent two weeks earlier, by the way. The others: 63.9 percent Android 2.2; 27.2 percent v2.1; 3.5 percent v1.6; and 2.7 percent v1.5. Android 2.3 released about four months ago. But the fragmentation is broader, with Android 3.x for tablets. As Nokia already has shown with Symbian, fragmentation diminishes the end-user experience and creates problems for developers and their customers. Just because Android gobbles up market share like Pac-Man, doesn't mean the broader platform will provide the applications people want most or can use easily enough.

6. Apple's mobile platform is the most compelling option right now, and it will be until more of the competing operating systems -- like Android, BlackBerry and WebOS -- ship on tablets and other devices in addition to cellular handsets. The cloud-connected device era is bigger than smartphones. Apple offers a platform that scales from $49 iOS devices to $2,499 Mac OS X laptops.

7. Synchronization is the killer application for the cloud-connected era. I've been harping on this point for years. Right now Google and Microsoft offer breadth of cloud and sync services compared to other mobile OS providers. Nokia also has breadth but not depth; its services strategy is a mess. Apple offers depth but not as much breadth. Google's mobile sync and supporting services range from search to shopping to email to maps to news and much much more -- all tied to a user's single identity. Google's cloud is perhaps Android's biggest differentiator today, even before the end user installs one third-party app.

Wrapping up, Android has unbelievable momentum, with sales up 888.8 percent in 2010, according to Gartner. It's not unstoppable, but might as well be. Do you agree? Comments await your answers.

58 Responses to Can Android be stopped?