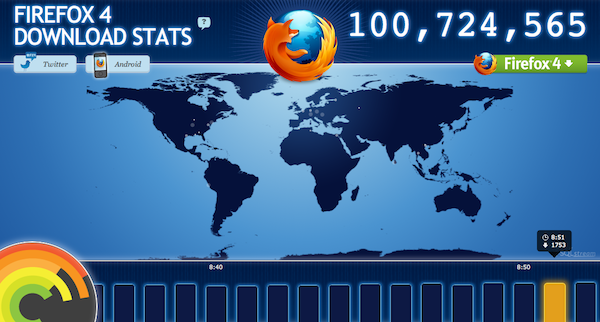 This morning, when seeing the date on my watch, I realized that about a month had passed since Mozilla released Firefox 4. I wondered how many downloads since the March 22nd launch. Geez Louise, it's more than 100 million, according to the Firefox 4 stat counter, and climbing fast.

Firefox 4 started strong out of the gate with 6 million downloads in the first 24 hours. By comparison, Internet Explorer 9, which launched about a week earlier, had just 2.35 million downloads. But in fairness, IE9 has a disadvantage -- it's not available for Windows XP. Yesterday, Microsoft touted 350 million license sales during Windows 7's first 18 months, but a sale isn't a deployment and doesn't mean running IE9 either. Additionally, XP is still the most widely-used Windows version.

In commenting about the 24-hour stats last month, Betanews reader Menting Lee rightly observed: "Impressive numbers, but it should really be compared to how many downloads of Firefox for windows 7 vs IE9, since IE9 is only available on windows 7." Well, IE9 runs on Vista and Windows Server 2008, too.

Now here's something strange. While writing this post, the Firefox 4 stat counter went blank. There's nothing there, even using Firefox 4. What? Are other people checking and overloading the site with traffic?

Who cares about stats like this? "The number of downloads is an indicator of interest," writes PC Tool in comments to the FF4 downloads post. "You actually believe the companies involved don't care what kind of interest their latest releases generate?" Right. Otherwise, why would Microsoft tout 350 million Windows 7 licenses sold. The numbers are huge for gauging interest and also for pubic relations bang.

"Interested says nothing to marketing until they get feedback. A download counter is not enough to determine either way which browser is better," commenter Sparxx2k7 responds to PC Tool. "Implementation, compatibility and useability in day-to-day applications is another thing. Once useful feedback from users is received, then something like this article (for sake of argument, the same numbers) would be indicative of one browser taking the web back from another."

So how about you provide some of that feedback about "implementation, compatibility and useability in day-to-day applications." If you downloaded Firefox 4, please share your one-month experiences here with the class -- in comments.

Many Betanews readers use Firefox, but it's not popular with everyone. All these comments come from the FF4 24-hour post, already linked, and they're to whet your desire to comment here and now. Peter Burns is "not a fan [of] the minimalist feel with all these new browsers. At least I can cust. firefox 4 to my liking. IE9, you['re] stuck with the main toolbar."

"I use FF4," Vincent Wright writes. "I have IE9, but I just like the add-ons too much. If there was a good ad-blocker for IE9, I would probably use it." Stephen Charchuk thinks "that FF4 and IE9 look an awful alot like each other now."

Again, please share about your Firefox 4 experiences in comments.