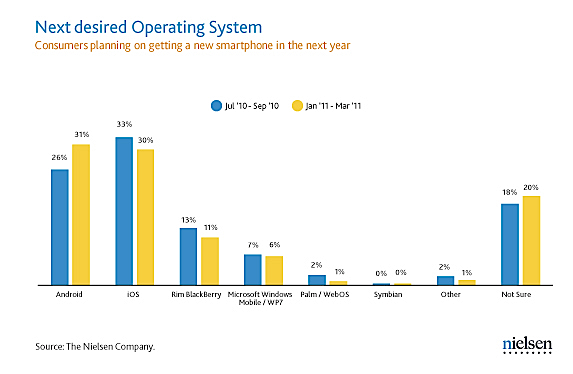 What's up with analysts skewing Android survey results, today? Are they looking for headlines by releasing contrary data? IDC kicked off the morning by asserting that developer interest in Android had plateaued; I disagree, using IDC's own data as evidence. Now Nielsen is overemphasizing Android's U.S. smartphone adoption gains, which would be impressive enough without the little kick.

From a purely statistical perspective, Nielsen strangely compares July-September 2010 to January-March 2011. Typically, analysts compare year over year or quarter to quarter. Android ranked as most desired smartphone OS -- 33 percent, up from 26 percent, when comparing the two time periods. Interest in iPhone fell from 33 percent to 30 percent, while BlackBerry declined from 13 percent to 11 percent. The data is for U.S. consumers planning to buy a new smartphone.

"Things change quickly in the U.S. smartphone market," according to a Nielsen blog post. Referring to the numbers: "Those dynamics are already translating into sales. Half of those surveyed in March 2011 who indicated they had purchased a smartphone in the past six months said they had chosen an Android device." Hello, Nielsen, those dynamics were already at play.

Before continuing, I assume that Nielsen refers to the six months ending March 31st. Let's compare to another six-month period, ending in November, for which Nielsen revealed data on January 3rd. At the time, 40.8 percent of new smartphone buyers had a device running Android -- that was up from 27.5 percent in June 2010. I don't mean to diminish the 50 percent number four months later, but point out it follows a trend ongoing for most of 2010, based on Nielsen's own data. Nothing quickly changed -- a trend continued.

At the end of March, 25 percent of new acquirers (as Nielsen calls them) bought iPhones and 15 percent BlackBerries (based on operating system). That's down from 26.9 percent and 19.2 percent, respectively, at the end of November 2010. BlackBerry's decline had been ongoing and steady -- from 35 percent in June 2010. By comparison iPhone had been flat since July 2010, when new acquirer share was 27.3 percent.

What Nielsen should have addressed, and this is meaningful: The 1.9 percent iOS decline during the same three months as Verizon launched iPhone 4 (on February 11th). Combined, AT&T and Verizon activated 5.8 million iPhones during the first quarter. That Android OS kept increasing steadily, while iOS dipped means something. Perhaps Android's gains are greater than Nielsen stats indicate. Another possibility: Nielsen's survey results is flawed, which is more likely. The problem isn't Nielsen's methodology but the respondents. In my experience conducting operating system surveys, consumers often aren't sure what they've got or what they want. It's no surprise then that 20 percent of Nielsen's respondents planning to buy a new smartphone are "not sure" about which operating system.

Nielsen also measures U.S. smartphone install base. At the end of March: 37 percent Android, 27 percent iOS and 22 percent BlackBerry OS. Again, there's nothing changing quickly. The data represents an ongoing trend. Android rose from 15 percent to 25.8 percent between June and November 2010, according to Nielsen. During the same timeframe, BlackBerry OS fell from 33.9 percent to 26.1 percent. Apple was flat, with share rising and falling like low hills -- 27.9 percent to 28.6 percent. Again, Nielsen should be trying to explain why Apple's share fell 1.6 percent even after the Verizon iPhone launch. Nielsen should also do what ComScore did: Measure platform reach.

There are other ways to measure the operating systems. Last week, Google said that it was activating 350,000 Androids per day, which works out to about 31.5 million per quarter. Apple sold 18.647 million iPhones during first calendar quarter, which works out to more than 207,000 per day. The comparisons aren't exact, since Google didn't reveal number of Android handsets sold or say if the number of activations per day was consistent for 90 days. Nevertheless, as measured by units, the data is enough to conclude Android handsets are considerably outselling iPhones. But, again, that's another ongoing trend.

Bottom line: Android is doing quite well in the United States, but there's nothing dramatically different going -- contrary to how Nielsen presented its data. Things didn't "change quickly." And the question everyone should ask: Why didn't iPhone get a boost from Verizon distribution?