At the Android Keynote on the first day of Google I/O 2011, Google announced the next version of Android called Ice Cream Sandwich will unify tablets, phones, and Google TV devices under a single version of the operating system. Yet a new facet to Android was introduced today that may turn out to be the most left-field announcement of the conference: Android for embedded devices and home automation.

Android founder Andy Rubin summed up the operating system's progress in the following way at a press conference Tuesday morning: Android started with phones, then grew to tablets, and now it should grow to everything.

"The Android circle is getting bigger," Rubin commented. "Everything should be... Androidified?...is that the word?"

So to extend Android beyond phones and tablets, it's moving into hackable devices and home automation with Android Open Accessory. 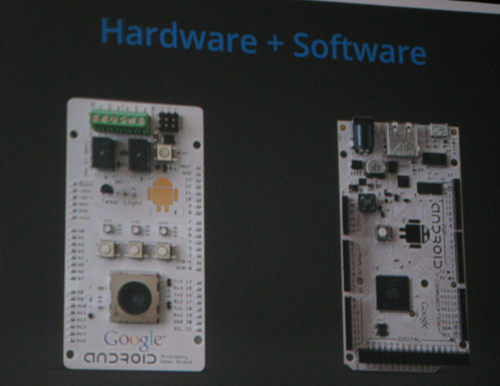 Unveiled today, the Android Open Accessory Development Kit (ADK) includes an Android USB accessory based on the Arduino prototyping platform (shown above) and an Android application that interacts with it. With this, developers can build new and exciting hardware controlled by Android.

I/O 2011 is peppered with examples of what is possible with the ADK, little robots controlled by an Android device, in-home automation with the new [email protected] initiative, where lighting, power control, and appliances interact with applications running on Android, and Google's most dramatic example of this: a giant wooden maze that is controlled by the tilting action of a Motorola Xoom tablet.

The ADK is available to Android developers here.