Microsoft's Software Assurance pressures businesses to buy before they're ready 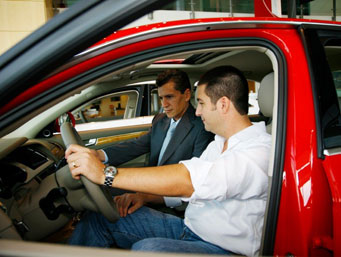 Third in a Series. A decade has passed since Microsoft introduced "Software Assurance" as part of Licensing 6.0. The company rewards loyal customers by asking them to pay ahead for upgrades -- 29 percent of total desktop software price and 25 percent for server products, annually, for two or three years. Customers must make the decision to add Software Assurance when acquiring a new license. It's a one-shot option, with no assurance what the product will be or when it will be available.

Imagine that you have just purchased a new 2011-model car. You've signed the contract, figured you could afford the monthly payments and are thinking Point B looks a lot better from Point A than it ever did.

Sales guy goes into the office, comes out with the keys, but says "before I give you these, I have a great deal for you."

"What's that?" you ask, thinking he's going to throw in leather seats for another $50 or something.

"Why is that a great deal? Is there something special about the 2014 car? Maybe I shouldn't be buying this one."

"Well, if I like this car, maybe I'll come back in three years and take you up on that discount."

"Sorry, but you only get the discount if you buy the 2014 car today. We'll let you make payments over three years."

"How big is the discount?"

"Our shareholders thank you for your money."

For some reason, Microsoft doesn't expect customers to walk away from a "deal" like that one. I suppose if you paid $6 billion for aQuantive (now in pieces); $5 billion for an investment in AT&T broadband (whatever happened to that?); or made a $40-billion-plus bid for Yahoo (now circling the drain), you might be willing to gamble on an uncertain future for your money.

For most customers, however, pitching them on a bird in the bush at the same time they have one in hand seems likely to fail most of the time.

That's the way Software Assurance works, though. If you don't buy it at the same time (in some cases, with 90 days grace) as you buy a new Microsoft software license, you can't ever add it to your new license, even if the payoff is years down the road and you risk losing all the money you put into SA.

Not surprisingly, that deal attracted very little action in Software Assurance's early days. Even with the big stick -- Software Assurance replacing other upgrade-anytime plans -- many customers resisted the "we take your money now and deliver something later (maybe) plan." Microsoft had to sweeten the pot to get more customers interested. But you gotta wonder: who thinks that hitting the customer with na extra bill for an uncertain payoff at the point of sale is a good sales tactic?

Another way that Software Assurance's timing is spectacularly bad is when Microsoft makes significant changes to a product's version line-up and gives SA customers preferential access to a new, premium version. Had customers known about the change at least a couple of years in advance, they might have been willing to add Software Assurance to their previous purchases, but they had no way of knowing that Microsoft would make a major change in the product lineup. As it is, Microsoft business customers generally don't learn until a few months before the release of the next version that they should have bought Software Assurance on the last one when they purchased it a few years earlier. All they can do now is rue their choice, not repair it.

For example, Visio 2007 came in Standard and Professional editions, so if a business wanted the version with the richest features they bought the Pro edition. The customer may or may not have elected to add Software Assurance to that license.

Visio 2010 came out with a different edition lineup: Standard, Professional, and a new Premium version that, for about twice the price of Professional, incorporated a bunch of cool new features. A lot of Pro customers were no doubt thinking "if Microsoft had only told me that they were doing this, I would have added Software Assurance to my Visio Pro license." But it was too late to add SA.

The moral: if Microsoft wants to maximize its Software Assurance revenue it needs to give customers a much better heads-up about significant changes to the product lineup that could prompt them to take the gamble, rather than waiting until it's too late for them to get into the game.

"Software Assurance: How Microsoft gambles with your money"