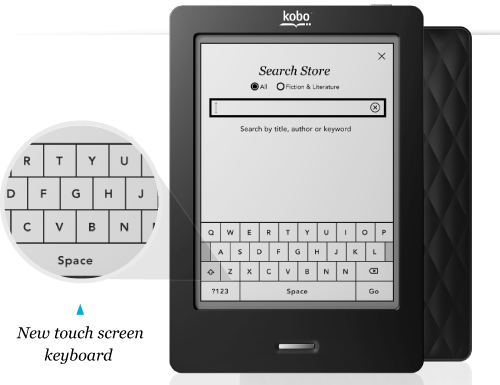 E-reader company Kobo on Monday revealed a new touchscreen e-reader that will continue the company's tradition of low-cost but widely distributed e-reading alternatives to Amazon's Kindle and Barnes and Noble's Nook.

The new Kobo eReader Touch Edition sports a 6" E Ink Pearl display endowed with Neonode zForce infrared touch technology. It runs on a Freescale i.MX508 processor and has 1GB of built-in storage with a microSD slot that supports cards up to 32GB in size.

Kobo eReader Touch Edition will be available at Best Buy, Wal Mart, Borders, and Indigo for $129.99 alongside the original Kobo e-reader which just dropped down to only $99.

As the book retail landscape changes, e-books and e-readers are viewed as the future core of the business.

Borders Group, the bankrupt book retailer that launched Kobo as its flagship e-reader exactly one year ago, is reorganizing its business around the e-book boom. According to a document filed recently, Borders is
terminating its contract with Starbucks subsidiary Seattle's Best Coffee Shops to save $10 million in operating costs. Removing coffee from bookstores is a definite sign of the times.

Borders' principal competitor, Barnes and Noble, is being courted for acquisition by DirecTV parent Liberty Media. In a statement last week, the company cited Barnes and Noble's excellent position in the "transition to digital."

Amazon, on the very same day as Liberty's announcement, announced it is now selling more e-books than paper books.

So even though Kobo is fighting for e-reader market share against leader Amazon and second place Barnes and Noble, it has a strong third place position with more affordable dedicated hardware, and an e-bookstore with over 2.3 million books, magazines and periodicals, and a retail presence in more than 100 countries.