Why can you download Office for Mac 2011 from Amazon but not Apple? 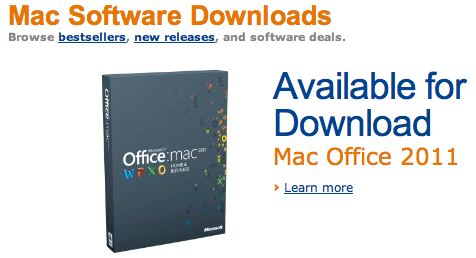 Perhaps the answer to that question will come next month during Apple's Worldwide Developer Conference, where Mac OS X 10.7 "Lion" takes center stage. The Mac App Store, which debuted in January as an add-on to v10.6 "Snow Leopard," will be built into Lion.

Amazon's Mac shop competes in the strangest of ways -- offering the big-name digital downloads you can't now find at the Mac App Store. Perhaps it's no coincidence the software selection largely aligns with the boxed versions also sold by Amazon. Prices are surprisingly aggressive. Amazon offers Office Home and Student 2011 for $115. Microsoft's online store charges $149.99 for the digital download. Boxed version is $117.28 from Amazon and $149.99 from Microsoft.

As with Windows software downloads, Amazon provides customers with a "Software Library" from which they can redownload applications or games (the Mac games store is new, too, by the way). Hey, look ma, no lost DVDs or license numbers!

Looking at the lists, it's reasonable to ask if Adobe or Microsoft would want to compete with Apple in the Mac App Store. Oh, and for anyone who says no Mac users want Microsoft Office, just refer them to Amazon's bestseller list.

Another question: Is there no one Amazon won't compete with? The retailer now has digital download stores competing with Android Marketplace, Mac App Store and just about every digital download/streaming music or video service. Amazon takes on Apple and Google and Netflix and who else next?

In terms of convenience, Apple's Mac App Store is hard to beat. The store is self-contained within Mac OS X and app presentation is attractive and title discovery/search easy. True to its roots, Amazon's Mac Software Downloads store is web based. There's a whole lot more clutter (and confusion), but, as mentioned, there are also big titles from big developers.

So what's the answer to the "Why" question in the headline? I'll give one: Apple competes with the larger third-party developers at the Mac App Store. Amazon is a retailer and does not. Meanwhile, smaller developers who can't easily find physical or even digital shelf space at retail gain many benefits from Apple's store -- distribution, payments and piracy-discouraging DRM, among others. Then there is profit-sharing -- Apple takes a 30 percent cut. That might be OK with smaller developers looking for greater exposure. It's different for bigger developers. If Adobe or Microsoft, would you want to compete with Apple and give up 30 percent of sales?

Mac users, would you like to see Microsoft Office or Adobe photoshop carried at the Mac App Store? Please answer in comments.

5 Responses to Why can you download Office for Mac 2011 from Amazon but not Apple?