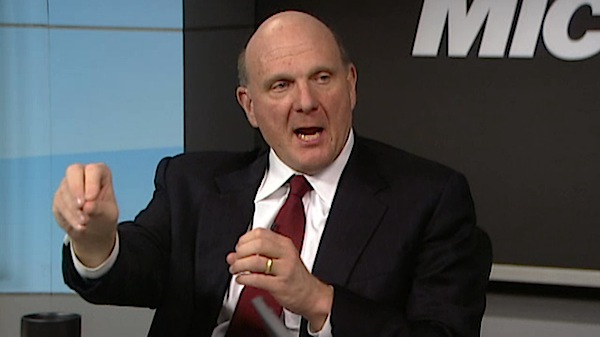 Is Microsoft's contract with analyst firm IDC up for renewal? Hey, the software giant's fiscal year ends June 30, so it could be. What else, other than group insanity, can explain IDC predicting, again, that Windows Phone will be No. 2 in smartphone operating systems come 2015? It's -- get this --  the second time IDC made such a prediction in less than two months. I guess the first time wasn't enough to get the contract signed.

Seriously, there is inherent conflict of interest between analyst firms like Gartner and IDC, since the majority of the companies they write about also are clients. IDC has done some mighty Microsoft-friendly research or white papers over the years. But this business about Windows Phone is just too much to believe. IDC's forecast validates Microsoft's Nokia-Windows Phone distribution deal without even one handset shipped. It's sheer speculation in a market changing so fast -- Gartner and IDC are forced to revise their forecasts every couple of months (without really acknowledging how wrong they were so short a time earlier).

This second forecast (June 9) is hard to fathom so close to the other (March 29). Surely it will embolden Microsoft CEO Steve Ballmer to believe that he can turn around the company's lagging performance in the handset market. That's not good for Ballmer, given recent calls to have him removed as chief executive. I promise you that as long as Chairman Bill Gates still believes in Ballmer, the CEO isn't going anywhere else. So IDC is swelling Gates' head, too.

I so disbelieve in IDC's forecast (OK, two of them now), or at least the analyst firm's ability to make a reasonable one four years from now, that in March I promised: "If Windows Phone is No. 2 by 2015, I'll kiss Steve Ballmer's feet." I reaffirm that pledge today, but with a caveat: Assuming Ballmer is running Microsoft in 2015. Hey, IDC, now that would be an interesting prediction to make. Will it be Ballmer or someone else?

Writing for GigaOM today, Ryan Kim shares some of my skepticism: "Windows Phone 7 and Nokia have a lot of believers at market research firms. How else to explain the latest IDC smartphone forecast, which puts WP7 ahead of iOS in the number two spot by 2015, where it will trail behind Android?...The bottom line is that 2015 is a ways off. Consider how fast things have changed in just the past year...Nokia and Microsoft have to nail their execution to ensure that they have any hope of hitting 20 percent by 2015."

I'll say. "Nail their execution" is right. IDC again assumes that the majority of Symbian smartphone sales will go to Windows Phone between now and 2015 -- all without even one handset yet being shipped and ignoring the likelihood Nokia will lose a huge chunk of its customer base to rivals Android and iOS during the transition. IDC sees Symbian's smartphone market share at 20.6 percent in 2011 and Windows Phone's at 20.3 percent in 2015. A complete switchover and nice big swelled head for Ballmer and confidence in the Nokia-Windows Phone strategy.

The forecast actually should scare the crap out of Ballmer. Nokia may become the biggest Windows Phone distributor but it's not the only one. HTC and Samsung are among the handset makers selling Windows Phone mobiles or planning to. IDC's forecast essentially allows for no organic sales growth from other Windows Phone OEMs. Perhaps that explains why Microsoft's path to second place will be so far behind the frontrunner -- by IDC's measure. The analyst firm predicts Android's smartphone market share will be 43.8 percent in 2015. That's a decrease from the forecast 48 days earlier of 45.4 percent.

The stakes are higher now than 49 days ago. IDC now predicts 1 billion smartphone sales in 2015. For some perspective, there were 1.6 billion smartphones sold in 2010, says Gartner. According to the United Nations, there are 5 billion mobile phone subscribers worldwide. Based on current forecasts, the handset market won't so much grow bigger as move to smartphones.

"The smartphone floodgates are open wide," Kevin Restivo, IDC senior research analyst, says in a statement issued yesterday. "Mobile phone users around the world are turning in their 'talk-and-text' devices for smartphones as these devices allow users to perform daily tasks like shopping and banking from anywhere. The growth trend is particularly pronounced in emerging markets where adoption is still in its early days. As a result, the growth in regions such as Asia/Pacific and Latin America, will be dramatic over the coming years."

Those areas do happen to be Nokia strongholds today, but in the dumb phone and feature phone categories people will be switching from. Meanwhile, Nokia continues to ship Symbian and without a compelling smartphone or supporting services.

I'm a bit flummoxed IDC chose to release this forecast just days after Apple announced iCloud and that iOS 5 would ship this Fall. IDC rightly identifies what's driving smartphone adoption, without applying -- near as I can see -- it to the 2015 forecast. "Underpinning smartphone growth is the rapidly shifting operating system landscape," Ramon Llamas, IDC senior research analyst says, also in a statement. "End-users are becoming more sophisticated about what kinds of experiences are offered by the different operating systems."

Apple promises a compelling experience with both iCloud and iOS. Google promises to improve the smartphone experience with Android version codename Ice Cream Sandwich. Where does IDC see iOS smartphone share in 2015? A mere 16.9 percent, behind Windows Phone. Quick, run for the door before Ballmer's swelled head fills the room!