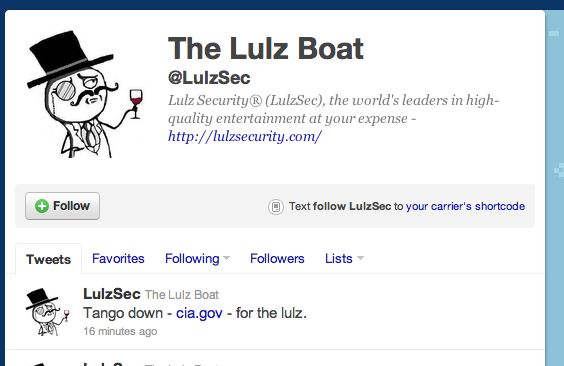 One day after opening a hotline to take requests for its next hacking target, black hat security group LulzSec appears to have taken down the website belonging to the Central Intelligence Agency (CIA.)

The image above is from the group's Twitter feed just about half an hour ago, CIA.gov remains unreachable (Error 7 (net::ERR_TIMED_OUT): The operation timed out.) from our location in Maryland (others claim to see no change to the site.)

If this is, in fact, the work of the group, then they can add the CIA to their list of victims, which already includes the FBI, The U.S. Senate, Nintendo, Sony, PBS, The Escapist magazine, Eve Online, Minecraft, FinFisher, and League of Legends, many of which were taken offline with denial of service (DDoS) attacks.

This story is developing.