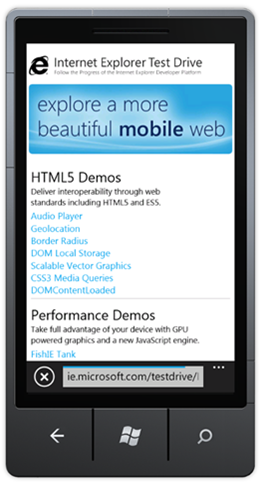 But don't crash your phone along the way.

Microsoft is preparing the developer channel for release of Internet Explorer 9 Mobile, which is coming with Windows Phone "Mango" sometime in the Fall. Today, the company announced the IE9 Mobile Test Drive, which showcases some of the browser's capabilities. Among the most highly-touted by Microsoft: hardware-accleration support for HTML5.

The test site is meant to not only showcase IE9 capabilities but Microsoft's support for emerging or adopted web standards. The company that once held back standards like CSS with IE6 is now one of their biggest champions.

However, as Microsoft pushes ahead supporting standards, it pulls back from others. The company has decided not to support WebGL for security reasons, in a stunning pronouncement made yesterday. AMD, Google, Mozilla, nVidia and Opera had been big WebGL supporters. Among Microsoft's problems with WebGL: "Browser support for WebGL directly exposes hardware functionality to the web in a way that we consider to be overly permissive," according to Microsoft Security Response Center post.

In a blog post today, Joe Marini, principal program manager for IE on Windows Phone, explains what developers can expect:

Over the coming months leading up to the release of Windows Phone "Mango" and beyond, we will be adding new samples to the Mobile Test Drive for you to try out, and will announce them here on the blog when we do.

The first 15 samples available on the Mobile Test Drive will be:

We're really looking forward to hearing your feedback. Grab the emulator, visit the site, test some of your own Web pages, and start trying out the new IE9 for Windows Phone!

If you're a developer working with the Mango development tools and testing out IE9 Mobile, I'd appreciate hearing about your experience, either in comments or by email: joe at betanews dot com.