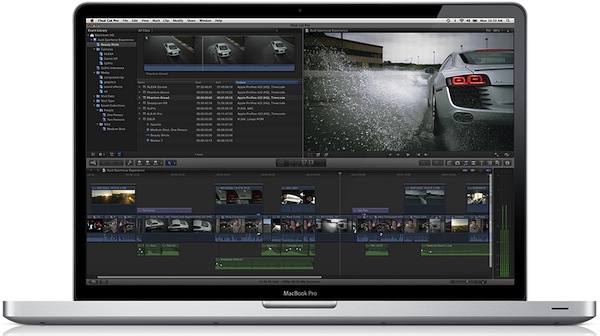 Today, Apple debuted Final Cut Pro X for the ridiculously low price of $299.99, along with Compressor 4 and Motion 5 -- $49.99 each. The previous version, available as a suite, sold for $999. The price cut reflects Apple passing savings onto customers through the Mac App Store. But digital distribution also is a means of compelling people using older Mac OS X versions to upgrade.

Final Cut X is available via digital download, exclusively for Mac OS X 10.6 Snow Leopard customers and perhaps those folks lucky enough to be testing successor Lion. The price reduction is no means the first and unlikely the last. For example, Apple dropped photo-editing suite Aperture's price from $199 to $79 when Mac App Store launched in January. Presumably, Apple is passing savings onto customers. Digital download means Apple doesn't have to manufacture disks and boxes or distribute them.

The company could still do so, to keep coveted shelf space for its software. But that appears not to be the case here. Product information for Final Cut Pro X, Compressor 4 and Motion 5 state that they are available "exclusively from the Mac App Store". From one perspective, the approach is risky, since retail shelf space is considered to be so important. Perhaps, but something else may be more important to Apple: Moving any laggards to Snow Leopard or Lion, which goes on sale through the Mac App Store next month.

Since Mac App Store is an add-on to Snow Leopard and is built-in to Lion, people wanting the newest Final Cut version will need to be using either of those operating systems. Lower pricing is the carrot. Confined availability is the stick.

Perhaps Microsoft should imitate Apple's approach. The software giant has hard enough trouble getting customers to upgrade to its newest versions of Office and Windows. A Windows app store exclusively available for Windows 7 and 8 could pull customers, particularly businesses, forward to the newest version of Office. Windows app store would be great means of deterring piracy, particularly if Microsoft stopped selling boxed software.

Apple's approach, whether intentional or simple byproduct, is sure to push video producers and aficionados wanting Final Cut Pro X to Snow Leopard or Lion. That's where the other carrot comes. Yeah, there are two. "Final Cut Pro X is the biggest advance in Pro video editing since the original Final Cut Pro", Phil Schiller, Apple's senior vice president of Worldwide Product Marketing, says in a statement. That's no idle claim, because Apple completely rewrote the 64-bit app.

Final Cut Pro X requires an Intel Core 2 Duo processor or better; 1280 by 768 resolution display or greater; 4GB RAM (recommended); OpenCL-capable graphics card or Intel HD Graphics 3000 or later -- 256MB video RAM or better; and Mac OS X 10.6.7 or later. That operating system requirement is the second stick. Not only do you need Snow Leopard or Lion to get Final Cut Pro X, you need either of the operating systems to run it.  But that's OK. Apple charges less than 30 bucks for either. It's a cheap upgrade.