If a college graduate, older than 30, wealthy and Hispanic, you probably own an e-reader 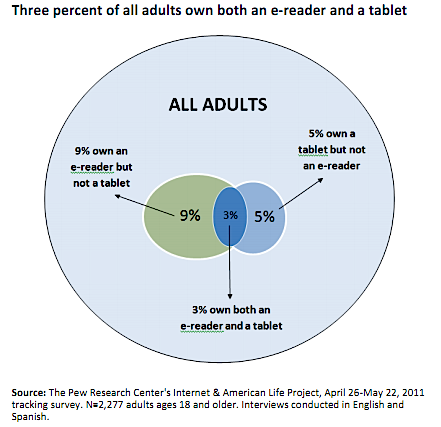 OK, probably is a stretch, but more likely. :)

The ebook reader market is beginning to pick up -- and why not with Amazon and Barnes & Nobile offering good devices and marketing the Holy Hell about them. You have to be vacationing on Mars not to know what Kindle and Nook e-readers are.

During the last six months, the number of American adults using e-readers doubled, according to a new report released today by Pew Internet. That's up from 6 percent to 12 percent. During that timespan, Amazon released lower-priced Kindle with advertisements and Barnes & Noble rolled out Nook Simple Touch.

"Hispanic adults, adults younger than age 65, college graduates and those living in households with incomes of at least $75,000 are most likely to own ebook readers", according to the report. "Parents are also more likely than non-parents to own these devices."

Nearly one in four Americans with household income of $75,000 or more own e-readers -- 22 percent of college educated.

Pew also looked at tablets, which adoption is growing slower than ebook readers, despite iPad 2 hype and the rush of competitors to market. There was just a 3 percent change since November 2010 and 1 percent since January 2011 to 8 percent of American adults.

Not surprisingly, there is overlap -- "three percent of US adults own both devices. Nine percent own an ebook reader but not a tablet, while 5 percent own a tablet computer but not an e-reader", Pew says. Kindle and Nook apps are available for major tablet operating systems, including iOS.

Greatest adoption is among same groups as e-readers. "Overall, the highest rates of tablet ownership are among Hispanic adults and those with household incomes of at least $75,000 annually", Pew says.

My question: Do you own both a tablet and ebook reader? Please answer in comments.

4 Responses to If a college graduate, older than 30, wealthy and Hispanic, you probably own an e-reader