When was the last time you heard about customers turning against Apple? How about today? 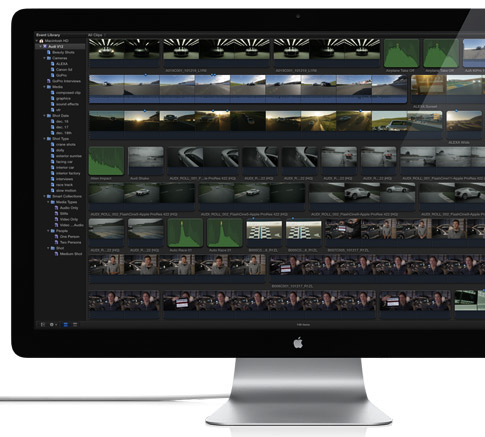 Last week, I reported first about buyers dissing Final Cut Pro X. Then comedian Conan O`Brien turned negative reaction into a punchline. Now there's a petition against the product -- and demands. My, God, they're making demands of their holy leader Steve Jobs. Well, they don't directly mention the CEO, just Apple. But aren't they one in the same?

When I started writing this post, there were 1,300 petitioners claiming "Final Cut Pro X is not a professional application". As I post, the number is more than 1,650.

Before I write one more sentence, I've something to say to the petitioners: Use the Final Cut Pro version you've got now. Stop whining. I understand that you're victims of Pavlovian training -- to rush out and buy the newest thing from Apple.

But these, ah, demands make you look like a spoiled bunch of school girls (Perhaps you've seen 1988 movie "Heathers"). The problem isn't so much your gripes about Final Cut Pro X but the demands.

Before getting to the gripes and demands, this: there is the problem of Apple product development working too much in a vacuum without input outside the hallowed halls of the Cupertino, Calif. headquarters. Apple likes to keep products secret before they're announced, making more difficult the process of doing customer research. Sure there are private betas for operating systems like iOS and Mac OS X but how broadly does Apple collect feedback on applications.

"Apple did not listen to thousands of professional editors who have been loyally and professionally utlilizing Final Cut Pro for years", writes new Betanews commenter MacReview. "All along it seems that Apple did not get the different needs that a more advanced editor must rely on every single hour of the day...What is outrageous is that they have totally abandoned the market that made FinalCut Pro an industry standard. And with no notification."

The commenter expresses a sentiment common to other people complaining about Final Cut Pro X and to the petitioners:

We, both the editors and affected filmmakers who rely on Final Cut Pro as a crucial business tool, do so in the same way Photoshop, Maya, Pro Tools and other industry-standard applications are relied on by leading post-production environments. Many have invested hundreds of thousands (some even millions) of dollars in creating Final Cut Pro based companies. These are now threatened by a 'prosumer-grade' product upgrade of Final Cut Pro 7 titled 'Final Cut Pro X', and will likely put several of these companies out of business.

Since when has Apple worried about putting customers or partners "out of business"? The company has changed products for years, unannounced, to keep the veil of secrecy. Most of the past examples are about hardware changes that unexpectedly made peripherals, iPod cases and other add-ons suddenly obsolete. iPhone 4 is different shape than iPhone 3GS. iPad 2 is thinner than iPad. iPod mini disappeared at the height of popularity to be replaced by diminutive iPod nano. Serial and VGA ports disappear on iMac, which changed translucent color in another revision -- and tens of thousands of peripherals were suddenly useless. Apple frequently changes ports on computers, BTW.

I won't even go into the wanton havoc some Mac OS X changes have wrought. Too much of it unannounced. Perhaps video-production companies consider themselves too important to fall under Jobs' gamma ray. Sorry, Apple is a wasteland of partners jilted by sudden product changes -- mostly to protect the veil of secrecy. The petitioners continue:

A large corporation such as Apple, Inc. should not make 'revolutionary' paradigm-shifting changes to software which can be referred to as 'industry-standard'. This is unfair to workers who rely on Final Cut Pro as a business tool and will devastate the Final Cut Pro community. Many editors have relied on the software since its first release and supported Apple through both the hard and easy times. Apple Inc. now has over $75 billion in assets and does not need to risk the livelihoods of its professional customers by silently discontinuing 'Final Cut Pro' instead of selling it to a company willing to support working film, TV, and advertising industry professionals.

Say what? "Unfair to workers" and Apple "should not" do this or that? Hey, I get paid to be a smart ass, to sass companies like Apple. But I know Apple isn't listening to me or much anyone else. These professionals think they can tell Apple, with its "$75 billion in assets" was product it should call professional? Oh but they try:

We, the Final Cut Pro community, hereby request that:

1. Final Cut Studio 3 is immediately reinstated, supported, and referred to as Apple's 'professional grade' editing application.
2. Final Cut Pro is restored under a new name with the functionality and user interface of Final Cut Pro 7.
3. Final Cut Pro X is to be considered part of the iMovie family or labeled a 'prosumer' product.

I see Apple bringing back Final Cut Pro Studio, like it kept iMovie 6 around after version HD caused a smaller revolt. If customers are asking to pay $900 instead of $300, for v7 vs X, who is Apple to refuse such a request? But downgrade Final Cut Pro X to Prosumer X or selling the v7 source code are fairy tales. Perhaps the petitioners need to separate the fantasy of the films and TV shows they edit from reality.

Here's a suggestion: Instead of complaining, why not keep working with the Final Cut version you've got, upgrade while retailers still have v7 or accept you can't trust Apple and switch to something else. Or wait for some smart developer to create tools to import your projects.

There's something really pretentious about the gripes and demands. Many Microsoft customers loathed Windows Vista, but they certainly didn't react like this. Perhaps these Final Cut Pro customers feel so close to Apple, like being part of the family, they can make haughty demands. Being a customer doesn't give you rights to anything. Even when you buy the software, Apple retains full ownership over the code. You're a leesee, and the lessor just renovated the property. Live with it or move out.

26 Responses to When was the last time you heard about customers turning against Apple? How about today?