Wow, Twitter reaches 200 million tweets per day, and the service isn't all that popular

Today, Twitter revealed the 200 millon figure via its official blog. It's an amazing feat, up from 2 million in January 2009 and 65 million a year ago. But what if more people tweeted?

So, in this country at least, a small number of Internet users are doing a whole lot of tweeting. How do 200 million tweets measure? "The world writes the equivalent of a 10 million-page book in Tweets or 8,163 copies of Leo Tolstoy's War and Peace", according to Twitter. "Reading this much text would take more than 31 years and stacking this many copies of War and Peace would reach the height of about 1,470 feet, nearly the ground-to-roof height of Taiwan's Taipei 101, the second tallest building in the world".

Think about it. One billion tweets every five days or 6 billion every 30 days. Suddenly, 140 characters seem like more. 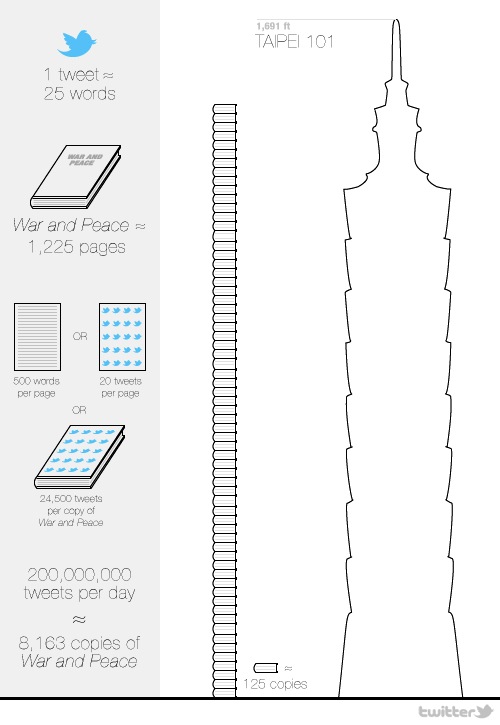 12 Responses to Wow, Twitter reaches 200 million tweets per day, and the service isn't all that popular