Take advantage of Dropbox revised terms of service with SecretSync 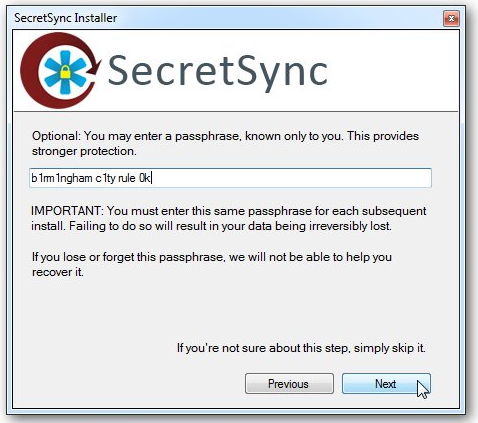 On Friday, Dropbox revised its terms of service, privacy policy and security overview documents. Although the updates are designed to make Dropbox's T&Cs simpler and easier to understand, it has reignited the debate that first surfaced when Dropbox announced it was changing its terms and conditions to allow it to hand over data if required to do so by the authorities.

In its defense, Dropbox has always recommended software to let users encrypt their data before its uploaded to Dropbox's servers, thereby protecting their data even if Dropbox was forced to hand it over. TrueCrypt is one such solution, and BoxCryptor is another, and now there's a third option available for Linux and Windows users in the form of SecretSync.

The cheapest solution is undoubtedly TrueCrypt, but it can be fiddly to install and set up. BoxCryptor is designed to make the process as simple as possible, and its competitive pricing (2GB free, unlimited encryption for a one-off fee) also works in its favor. But sadly BoxCryptor only works on Windows machines.

SecretSync, currently in public beta, follows a similar approach to BoxCryptor, but has the added benefit of working on Linux machines as well as Windows. An OS X build for Macs is also planned.

Like BoxCryptor, all the hard work of configuring SecretSync is done when installing the program in terms of setting up a password and (optional) passphrase that, in conjunction with your email address, is used to generate the encryption key. Once done, a folder is created on your computer into which all your sensitive data is copied. By storing this folder in your Dropbox folder (or by linking to it via another backup tool like SugarSync, which also stores encryption keys on its servers), you can safely store your most sensitive data, free from prying eyes.

The major drawback with SecretSync is the proposed pricing model. While the 2GB accounts will remain free, which should be enough for most people, although some clever management may be required in terms of which files get stored where, if you want to store more than that you'll be expected to pay an annual fee of $40 or $60. This compares unfavorably to BoxCryptor, which charges a one-off cost of $20 (home) or $50 (business) for unlimited encryption, or TrueCrypt, which will encrypt your chosen folder for free.

SecretSync 0.169b is available for free download now for both Windows and Linux PCs. Java 1.6 or later is required on all platforms, while Windows 2000 and XP users will also need the .NET Framework 2.0-3.5 installed.