The irony and infamy of LulzSec's Rupert Murdoch attacks 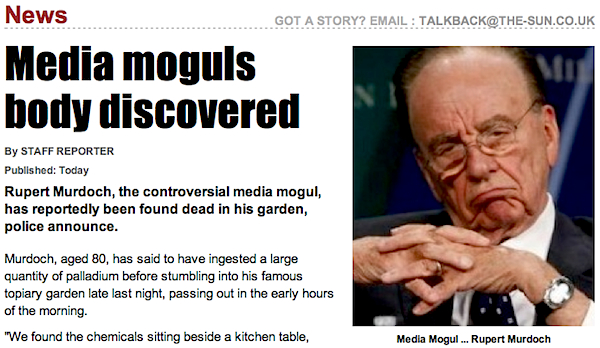 There's an irony to today's LulzSec attacks on News Corp. websites. It's bad for newspapers to wiretap, but OK to hack them. That's the message from the hacktivists -- they're justified to break the law but no one else.

"Rremember, we here at Lulz Security don't approve of criminals. Every single one of them, except us, should be imprisoned forever", LulzSec tweeted two days ago. Well, that settles the longstanding debate about whether LulzSec is a group of well-meaning hacktivists or simply cybercriminals. "Except us" is an admission of being criminals. Or perhaps it's just tart admission of the view of others.

Today's hacks unfolded rapidly as LulzSec livetweeted them. But what came before them is interesting. On June 25, LulzSec suddenly retired after 50 days of hactivisim. At the time, I asked: "What is LulzSec afraid of?" I didn't believe it was all over, writing: "Perhaps today's announcement is just a big gag -- the Lulz Boat sending a decoy to sea, while it sails for new booty and the enemy fleet moves in the wrong direction".

LulzSec suggested that might be the case in July 3rd tweet: "The Lulz Boat is on holiday across mysterious shores, but we have a lovely surprise for you in the future".

The twitter account came to life again on July 16, livetweeting a car chase. Then, today, the Lulz canons fired: "So remember that secret pastebin operation... well...http://t.co/JlXf3tH This is only the beginning. FUCK YOU MURDOCH. YOU ARE NEXT".

News Corp. Chairman Rupert Murdoch had already come under fire for a wiretapping scandal that led him to shut down 168 year-old News of the World a week ago yesterday. What initially seemed like a nasty scandal blew up in Murdoch's lap, leading to investigations by British Parliament, resignations by two senior News Corp. executives and several ill-received apologies. Looks like that wasn't enough for LulzSec.

Soon after the first tweet late this afternoon came another: "We have owned Sun/News of the World - that story is simply phase 1 - expect the lulz to flow in coming days".

The headline had a hint of authenticity because of another death. A former News of the World reporter who was whistleblower about the wiretapping was found dead today.

More tweets followed: "We are battling with The Sun admins right now -- I think they are losing. The boat has landed... >:]" and "TheSun.co.uk now redirects to our twitter feed. Hello, everyone that wanted to visit The Sun! How is your day? Good? Good!"

As I write this post, Sun's site is still down, presumably from a LulzSec DDoS attack.

Two of LulzSec's most recent tweets taunt: "Arrest us. We dare you. We are the unstoppable hacking generation and you are a wasted old sack of shit, Murdoch. ROW ROW FIGHT THE POWER!" and "Thank you for the love tonight. I know we quit, but we couldn't sit by with our wine watching this walnut-faced Murdoch clowning around".

There's something personal in the tone of today's hacks and the tweeting about them. Maybe I'm reading something that isn't there. The other hacks came with claims of exposing government secrets or defending the oppressed. Today's tone is loathing, condescension and provocation. Where's the public benefit? Rather, the hacks and DDoS attacks restore LulzSec's infamy by attacking an easy target. I wonder: Could it all backfire and generate some sympathy for Murdoch at a time when he gets little to none?

Perhaps LulzSec members really do feel some righteous indignation against Murdoch. But I want to ask you: Does the one criminal act justify the other? Please answer the question comments.