Are you one of the 20 million Google+ users? 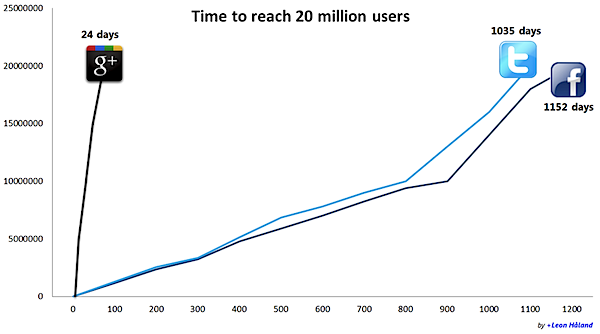 In May 2006, Facebook opened to the public, already with about 6 million active users (mainly from schools). The service reached 20 million active users 11 months later. Google announced the G+ service -- invite-only during early testing phase -- on June 28. But those invites trickled out at first. Three weeks later, Google+ already had 20 million subscribers, or so claims Pluser Leon Håland.

Håland put together the chart above comparing the trek to 20 million -- Facebook, Google and Twitter. He counts 1152 days for Facebook to reach 20 million users. That's from the service's launch in 2004. I decided to count from public availability rather than the exclusive university launch. Last week, Google CEO Larry Page revealed 10 million Google+ users achieved in 14 days.

That means the number of international visitors is three times greater, which is refreshing. Their feedback will help ensure that Google+ isn't American-centric, as are too many tech products or services. But these visitors also mean something else: The potential network effects are enormous. Google has a "built-in visitor base of more than 1 billion to work with, so there is clearly potential to convert a high number of users to its new social tool -- even if it is still invite-only" Lipsman observes.

Maybe, but Google search share is 70 percent to even 90 percent in some countries. As I explained on June 29, search is the lever: "Google can, and apparently is, wrapping social features around search. Google is laying the foundation, preparing the framework, for this to happen...Search and + tied to Google search and Android phones give Google the potential to amass a social community extended to its other products and services".

"As we've seen in the social networking market before, success often hinges on a strong network effect, which says that the more people in the network the more useful it becomes to others and the more incentive there is to participate", Lipsman writes.

I haven't used Google+ as much as I want to (time constraints) but I enjoy every minute I spend there. Facebook and Twitter are chores -- joyless experiences. I've stopped using Facebook and only hold on to Twitter because there are more followers everyday. I'm done with Tumblr, which I'll turn private rather than delete (not knowing who might get my discarded username and to keep a content archive for my own reference). LinkedIn is finished, too. I like Google+ that much and find the community plenty big enough.

Could it be that Google has finally done social right? "Early interest in Google+ is certainly important, but it will also need to attract regular participation among users to cultivate such an effect", Lipsman observes. "In the past week, we have seen the number of average usage days via home and work computers increase by more than 30 percent, an early indication that the network effect just might be beginning taking hold".

Facebook has overwhelming lead, with 750 million active users. But Google+ doesn't have to be Facebook -- and it most certainly isn't. I use Google+ differently than Facebook -- more in the way I manage real world relationships.

"Time will ultimately tell if Google+ can leverage its early momentum to reach critical mass among users and capture a firm foothold in the well-established social networking market". I predict it will, but let me ask you. Do you have Google+? Do you use it -- and how? I'll ask these questions at G+, too. Please answer in comments here or there.

41 Responses to Are you one of the 20 million Google+ users?