Find out what's really happening on your PC with ProcessThreadsView 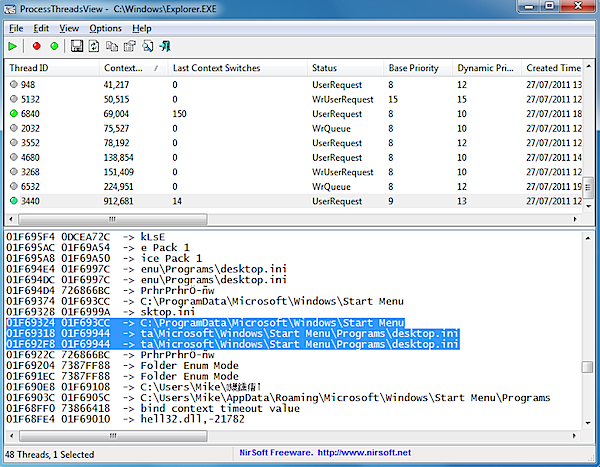 It's barely a week since NirSoft owner Nir Sofer released his last creation, CustomExplorer. But the prolific developer is already back with ProcessThreadsView, a powerful low-level system monitoring tool that displays in-depth information on the threads of whatever process you specify.

And we do mean "in-depth". Choose a process and you'll get to see each of its threads, along with their creation time, thread ID, status, number of context switches, base and dynamic priority, window title (if appropriate), class and a whole lot more.

There's also extra information available that isn't displayed by default. So if you choose the Options menu then you can monitor call stacks, processor registers, stack binary values, addresses and so on. And you're not restricted to simply watching activity: the program can suspend and resume threads, too.

Of course if you're already familiar with tools like Process Explorer or Process Hacker then this may not seem too interesting, as both of those utilities can also display in-depth details on process threads. But ProcessThreadsView does have a couple of advantages that could make it worth a place in your troubleshooting toolkit.

First, the program doesn't restrict you to monitoring threads in a small section of a single dialog box, like Process Explorer: you can maximize its window to more easily monitor how a host of different thread attributes change over time. Second, ProcessThreadView will by default display strings on the stack of your chosen process, and that can tell you considerably more about what it's doing.

As an example, choose the Explorer process, then select the thread with the largest number of context switches. On our system this revealed URLs, file names, Registry keys and more, a lengthy list of useful low-level information.

Apply the same idea elsewhere and ProcessView could be very useful when you want to monitor malware, find out why a thread has apparently locked up, or carry out any other low-level system explorations. And as its executable is a mere 80KB, we'd hazard a guess that you can find space for the program, somewhere: so go grab a copy immediately.