Pulmon Beta 3: You don't have to wait for Windows 8 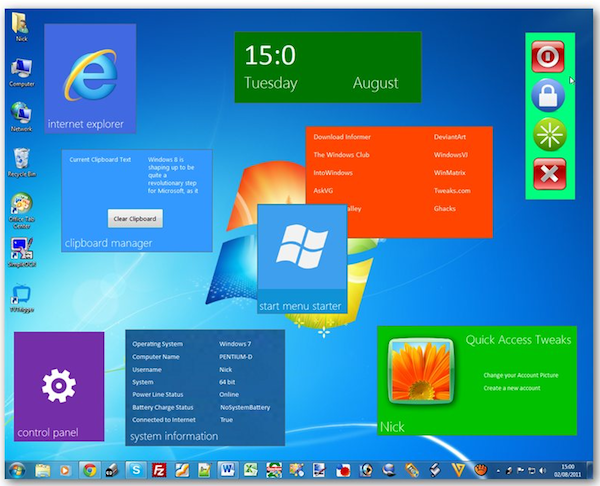 It's hard to imagine, but Windows 8 beta could come as soon as next month's BUILD conference. One of the new features it looks likely to sport is the stripped-back Metro UI interface, which debuted in Windows Phone 7, and which will ensure Windows 8 works across a variety of devices including smartphones and tablets, not just computers.

As details of Windows 8's features start to emerge, programmers and enthusiasts are busy coding their own mock ups of how these new features will work. And if you'd like to see how Metro UI might look on your Windows 7 PC, check out Pulmon Beta 3, which was released just a few days ago.

As the name reveals, Pulmon is very much a beta product, and thus unstable. This latest release introduces lots of new features that make it worth checking out though, helped by the fact that no installation is involved: just download Pulmon, decompress the RAR file using a suitable application like IZArc2Go and then double-click Pulmon.exe to get started.

You'll immediately see the program's configuration screen, with eight tiles listed under Add Tiles. Click one and it'll appear on-screen (it'll also move to the Remove Tiles section, and as you'd expect, clicking it here will remove it from your desktop). The tile can be dragged about the screen and you can attempt some interaction with it, although expect some bugs to show up.

Each tile is designed to showcase what you can do with Pulmon -- there's an IE tile that serves as a shortcut to Internet Explorer, plus a tile that displays some information about your computer as well as a clipboard manager tile, which lets you view the current contents of the clipboard (assuming it's text) and lets you clear it with a single click.

Beta 3 introduces a number of interesting features as well as the obligatory round of bug fixes: a custom widget has been added to the list, allowing you to point it towards any app of your choice, simply by right-clicking the app and choosing Settings. Other new tiles include the aforementioned clipboard manager and a simple Start menu launcher.

There's a new Settings button too -- from here you can disable the program from launching with Windows plus opt to view the tiles in full-screen mode, which basically blanks the desktop behind with a rather lurid purple background. Exit this view by right-clicking the desktop or pressing [F1].

Pulmon Beta 3 is a free download for PCs running Windows 7 only. It's pre-release software, so despite the fact it's a portable application, it should still be treated with care and used after backing up your system drive, just in case…

17 Responses to Pulmon Beta 3: You don't have to wait for Windows 8