Why is Amazon supporting a proposed federal sales tax law? 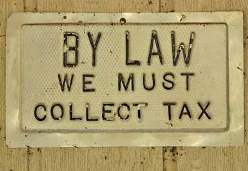 Amazon can't keep running away from states that require sales tax collection. Even they are now supporting a Democratic proposal to create an interstate agreement for standardized and simplified collection of taxes. Everyone's a winner except for those of you who have not been paying the use tax you're supposed to pay. It's a good and fair idea and it has no chance whatsoever of passage.

The remote buyer sales tax problem is an old one going back to the days of mail order and catalogs. The Internet has made it worse for states because the volume is so much greater, but the nature of the problem hasn't really changed. In that sense, the established court precedents might seem to close the books on the case.

But other things have changed, namely the same technology that makes Internet e-commerce so convenient. It can also make collection of out-of-state sales tax convenient. I have suggested in the past that the answer is an interstate compact of states for collection of sales taxes. Computers and the Internet should make it easy for merchants, maybe even easier overall than things are now.

Before going on to what a great idea this is, I should mention that of course it doesn't have a snowball's chance in hell of passing in Congress under current conditions. I reject the notion that this is a tax increase; it's only a means for collecting taxes that are already owed in any event. If you're in a state with a sales tax and you buy from out of state and are not charged sales tax, you are supposed to report and pay it as "use tax" to your own state. Twenty or 25 years ago I was living in Philadelphia and bought a computer (a Compaq Deskpro 386) from 47th Street Photo in New York. About a year later I got a use tax bill from Pennsylvania, which had conducted an audit of 47th Street Photo's records. Businesses generally do track and pay use tax, but many consumers don't and most probably don't even know they are supposed to. I know I didn't.

But the bill is too easy to label as a tax increase -- specifically a "Democrat tax increase" -- although they've only gotten a few Democrats to co-sponsor. It's impossible to conceive of this passing either house. This is why Amazon's support of the bill is not especially admirable. They can say they are willing to comply with a Federal solution, but obviously they just don't want to collect the tax because it would make them less competitive.

A recent Wall Street Journal story describes the organizational and procedural lengths to which Amazon goes to avoid having a "physical presence" in the problem states. It's clear this is important to them. And there are no-cost measures they could be taking that they won't because of the appearance of cost problem: When you make a purchase from a state for which they don't collect sales tax they could, for example, give you a notice that you may owe use tax and where you should go to pay it.

But I don't think Amazon and others can get away with this strategy for much longer. Too many big states are in need of too much money and this is a case where they can at least plausibly claim that they are already owed the money. Eventually it will be too limiting to big merchants not to be able to conduct real business in California.

One of the main objections to out-of-state collection is the administrative burden that it would present, but this is an obsolete problem. The Democratic bill specifies that member states in the agreement must agree to standardized definitions of products for the purposes of determining taxability. All the merchant need do is provide the category, address or 9-digit zip code of the buyer and the amount of purchase and the tax determination is a fairly simple combination of arithmetic and SQL query. Those definitions could probably be associated with UPC codes as well, making it even easier for the merchant.

I think the bill envisions standards only for sales taxes, but it could be made better by creating an independent entity to calculate and collect taxes from merchants and distribute them to states. In fact, why not have more than one? Perhaps different companies could form to collect sales taxes based on the rules in the agreement and compete based on payment turnaround and/or commission. It might be possible that, by holding payment to the states for a period, like 30 days, the collection company could get by just on the float from the money and charge little or no commission. Also, the bill doesn't discuss this, but it might be easier for merchants and states for in-state taxes to be collected this way too. That way merchants would have only one clearinghouse to send taxes to, and could do it with a single payment.

In the long run I think a system like this is inevitable. States are going to insist on something like this and at least it should be convenient and cheap to use. Not this year, but before too long.

22 Responses to Why is Amazon supporting a proposed federal sales tax law?